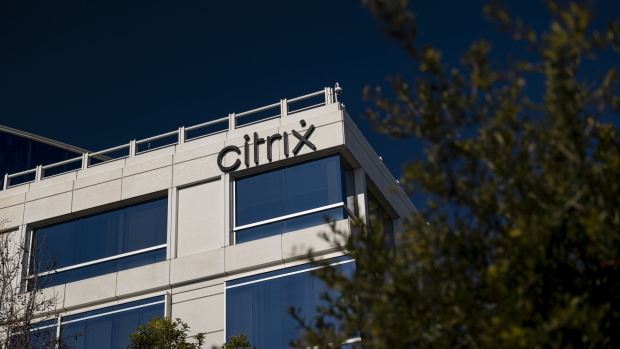 Citrix signage at the company's headquarters in Santa Clara, California, U.S., on Wednesday, Jan. 19, 2022. Elliott Investment Management and Vista Equity Partners are in advanced talks to buy software-maker Citrix Systems Inc., according to people familiar with the matter. , Bloomberg

(Bloomberg) -- Banks led by Bank of America Corp. are expected to keep about $2.5 billion to $3.5 billion of a loan provided for the buyout of Citrix Systems Inc. on their balance sheets, even as they ramp up efforts to offload the rest to investors.

The group of banks are trying to sell the remainder of the financing, roughly $3.55 billion to $4.55 billion, to a broad base of institutional investors, said the people, asking not to be named discussing a private transaction. How much the banks ultimately keep on their books depends on investor demand, and could even come in under $2.5 billion if orders are strong, one of the people said.

Roughly $1 billion has already been promised to private credit shops, some of the people said. The marketing process is ongoing and details could change, they added.

Banks back in January promised about $15 billion of debt financing to help support the buyout of the software company by private equity firms Vista Equity Partners and Elliott Investment Management. They’d originally planned to offload the debt via the high-yield bond and leveraged loan markets, but a deterioration in credit conditions over the following months limited banks’ ability to sell junk-rated debt.

While macro sentiment is improving, syndicating the entire financing would likely force lenders to incur steep losses. By retaining a portion of the $7.05 billion loan commitment, the banks are seeking to soften the blow, market watchers say.

The multibillion-dollar chunk of debt the banks will retain will be structured like a typical leveraged loan, but have a feature that prevents any one bank from offloading the debt before other banks have a chance to do so, some of the people said.

Bank of America plans to start fresh pre-marketing discussions next week, and the deal is expected to launch after the Sept. 5 US Labor Day holiday. The underwriters are also expected to retain about $4 billion of unsecured bonds in an effort to avoid realizing losses, Bloomberg previously reported.