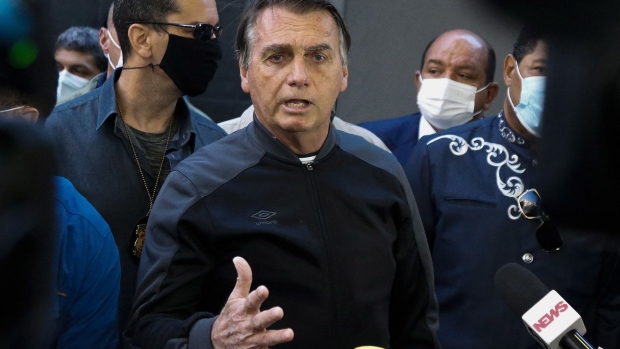 (Bloomberg) -- Brazil’s Jair Bolsonaro tapped a centrist lawmaker outside his inner circle to oversee his cabinet, the president’s latest maneuver to maintain congressional support amid police and senate probes into the government’s handling of the pandemic.

Senator Ciro Nogueira, a leader of the powerful block of ideologically fluid lawmakers know as the “centrao,” will become Bolsonaro’s chief of staff with the mission to maintain good relations with the legislature, the far-right president announced on Thursday.

“This improves dialogue with congress, and we will be able proceed as normal, leading the nation’s destiny,” he said on a live stream broadcast from the presidential palace in Brasilia.

Under fire for his government’s erratic response to pandemic, Bolsonaro has deepened his alliance with the centrao in recent months. The coalition, comprised of some 200 lawmakers across 10 political parties, has supported every Brazilian president over past decades in exchange for influence and jobs in the administration. More recently, it has been crucial to blocking over 100 calls for Bolsonaro’s impeachment.

The arrival of Nogueira, who had previously supported the left-wing governments of Luiz Inacio Lula da Silva and Dilma Rousseff, reduced the influence of old-time allies of Bolsonaro: the military and Economy Minister Paulo Guedes. General Luiz Eduardo Ramos, the previous chief of staff, was demoted to a more administrative cabinet role, while Guedes saw attributions of his ministry chopped to make space for another ally of the president.

Ramos has been criticized by centrist lawmakers for keeping tight control over budget negotiations with congress, according to four people familiar with the matter who requested anonymity because the discussion isn’t public. His demotion, the people added, was a pragmatic decision by Bolsonaro, who still has no party to push his agenda through congress, even with presidential elections little more than a year away.

“He has become dependent” of centrist parties, said Carlos Melo, a political science professor at Insper University in Sao Paulo. “The weaker he becomes, the worse his poll numbers, the more people that come out into the streets, the more power he will have to cede.”

Bolsonaro’s popularity has dropped to all-time lows as senators examine government mistakes that have contributed to nearly 550,000 Brazilians dying from Covid-19. Earlier this month, the inquiry found indications of kickbacks in vaccine purchases benefiting health ministry officials and a government-allied lawmaker.

A Supreme Court justice authorized a federal police investigation to determine whether Bolsonaro had knowledge of wrongdoing. He says he wasn’t aware.