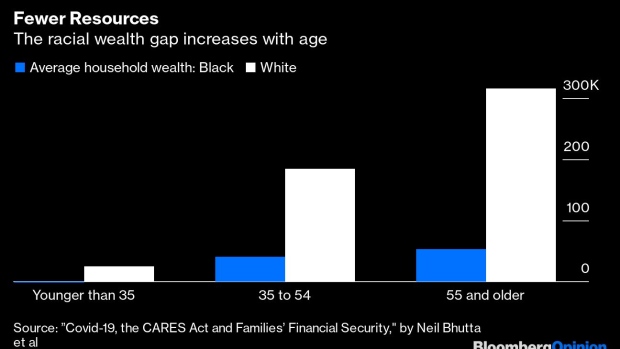 MOUNT PROSPECT, IL - DECEMBER 5: A sign that reads "Help Wanted Apply Within" is seen hanging in a window of a beverage store December 5, 2003 in Mount Prospect, Illinois. The Bureau of Labor Statistics of the U.S. Department of Labor released the November Employment Report today stating employment continued to trend up in November and the unemployment rate, at 5.9 percent, was essentially unchanged from October. Non-farm payroll employment rose slightly over the month to 57,000. (Photo by Tim Boyle/Getty Images) , Photographer: Tim Boyle/Getty Images North America

(Bloomberg Opinion) -- The prospects for another round of U.S. fiscal relief anytime soon have all but disappeared. This lack of action will hurt most all Americans, but minority groups in particular. And if nothing is done, the damage may not be reversed for generations. Consider that White Americans have, on average, seven times as much wealth as Black Americans. This gap widens with age, leaving Black families with fewer resources to buy homes, start businesses, invest in their children’s college education and leave an inheritance.

The divide means that Black families went into the Covid-19 pandemic with a thinner financial buffer. Only 14% of Black families had easily accessible savings that would cover six months of expenses, compared with 36% of White families. The relief provided by the Coronavirus Aid, Relief and Economic Security (CARES) Act was a lifeline to all families, especially people of color. The extra $600 a week in jobless benefits and its expanded eligibility were key to shoring up the savings of Black families. Altogether, the CARES Act meant almost all families, Black and White, had enough to cover six months of expenses.

Tragically, that relief is over. The direct payments are done and the extra $600 per week in jobless benefits expired at the end of the July. The other enhancements to unemployment insurance run out at the end of the year. We are already seeing signs that the added savings from CARES is disappearing fast. Blacks are some of the hardest hit groups in this crisis and need further relief the most.

Emergency relief to support families in a recession is important, but it is not a permanent solution to the racial wealth gap and financial insecurity.

Reparations is one idea that has gained more attention in recent years. Under this idea, the federal government would make large monetary transfers to the U.S. descendants of slavery. Duke University public policy professor William Darity Jr. and Artefactual founder Kirsten Mullen wrote a recent book  making a comprehensive case for reparations. They argue that the U.S. has a moral obligation to compensate Blacks for the violence against their ancestors and the ongoing economic effects of racism. They do not do not justify reparations because they could make the U.S. economy enjoy faster economic growth, but many others do make that argument.

New research suggests the economic argument for reparations may be flawed. Researchers at the Federal Reserve Bank of Cleveland find that if there had been reparations made to Blacks 50 years ago, the racial wealth gap would have initially narrowed, but then widened over time. They conclude that racial disparities in the labor market must be addressed to deliver lasting economic security.

To be clear, one paper does not settle the potential economic effects of reparations. But it should give pause before we assume that more resources in the hands of Black people now would translate into more resources for them and the broader economy later. Even investing in more education may not be enough. Blacks with a bachelor’s degree are almost as likely as Whites with a high school degree or less to have trouble paying their bills. Simply, more education does not guarantee more wealth when the playing field is not level.

A better path forward is to address structural racism in the labor market. The income of Black workers is consistently lower than White workers. Moreover, people of color are more likely to work in jobs with unpredictable schedules and hours, fewer worker protections and limited opportunity for career advancement. In addition, they face discrimination today as in the past.

Full employment, which is achieved when everyone who wants a job has one, would benefit Black workers. When the labor market is strong, more employers must set their biases aside and hire workers from many backgrounds and levels of experience. We saw that scenario play out recently. In the 12 months prior to the Covid-19 crisis, the unemployment rate was below 4% overall, and fell to its lowest on record for Blacks at 5.4%, government figures show.

A strong labor market is not what we have currently. September marked the sixth straight month that the unemployment rate for Blacks held above 10%, twice as many months as for Whites. Labor income is the way most Americans build wealth. High unemployment makes building wealth nearly impossible and destroys  gains of prior expansions.

No matter which party is in power next year or how soon we have a vaccine to combat Covid-19, Washington needs to get people back to work. Systemic racism, racial disparities in wealth, and low-paying, unstable jobs are a drag on the economic potential of all families and the country. The details of economic policy and its implementation matter, and it’s unclear if anyone has a plan.

The racial wealth gap is a problem borne out of racism. It deserves action. However, we must not use possible effects on gross domestic product as a primary motivation. As with many other policies, current output is not the right criterion. If it’s a moral argument, it’s a moral argument. Full stop.

Claudia Sahm is a former Federal Reserve economist and creator of the Sahm rule, a recession indicator.