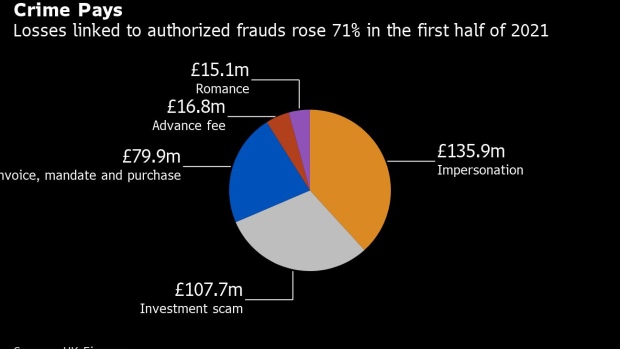 Losses related to such tactics -- known as authorized push payment scams -- rose 71% in the first half of the year to 355 million pounds ($485 million), according to a report published Wednesday by UK Finance, a lobby group for the banking industry. Cases rose 60% to 106,164.

These include everything from impersonation scams -- where criminals have posed as delivery companies, the NHS and even chief executive officers -- to investment swindles featuring ploys such as adverts on social media offering high returns. Romance rackets are also on the rise, boosted by the jump in online dating during the pandemic.

Some banks have agreed to compensate customers who fall victim to this growing form of fraud, reimbursing 121.7 million pounds in the first half, the report said.

Losses from unauthorized frauds, mainly payment card and remote banking fraud, rose 7% to 399 million pounds, the report said. In total, 754 million pounds was stolen through fraud in the first six months of 2021, up 30% from the same period last year.

“The level of fraud in the U.K. is such that it is now a national security threat,” said Katy Worobec, managing director of economic crime at UK Finance.

“Criminals continue to target customers with a variety of scams, often via online platforms,” she said. “It is only through coordinated action that we will be able to really make progress in addressing the problem.”

The report also warned that people as young as 14 are being targeted via social media and their bank accounts used to launder stolen money. There was also an increase in the use of cryptocurrency wallets to move funds outside of the banking system quickly.