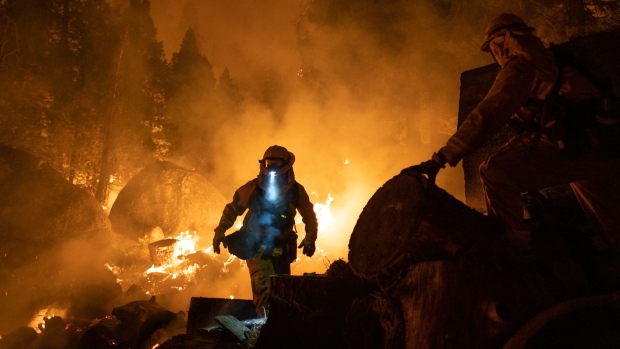 A palm tree damaged by Hurricane Ida in Galliano, Louisiana, U.S., on Tuesday, Aug. 31, 2021. More than a million customers in New Orleans and beyond face days or even weeks without electricity during the summer heat after Hurricane Ida devastated the power infrastructure. , Bloomberg

(Bloomberg) -- The sun will cross the equator at about 3:21 p.m. in New York, ending summer across the Northern Hemisphere as autumn starts -- ushering in a dangerous new chapter in the Atlantic hurricane season.

In the fall, the action in the Atlantic begins to shift from the region off the coast of Africa into the western Caribbean, and the Central American gyre weather pattern begins to have a larger influence over storm creation. It is in these warm waters near Jamaica that Hurricane Sandy was born a decade ago.

Ahead of the autumn shift is a rising threat from a swirl of thunderstorms near Cabo Verde in the Central Atlantic that could become Sam, the season’s 18th named storm. If that happens, 2021 would be tied as the fifth most-active hurricane year going back to 1851.

Better technology has allowed meteorologists to name more storms, “but any way you slice it, we’ve had a lot more storms this year,” said Phil Klotzbach, lead author of Colorado State University’s seasonal hurricane forecast.Seven storms, including the deadly Hurricane Ida that devastated the U.S. Gulf Coast as well as New York about three weeks ago, have hit the U.S. this season. In all, 2021 is pacing well ahead of an average hurricane season, which produces 14 storms from June to November, in almost all categories.

What goes on in the Atlantic isn’t the only threat as seasons change. Agricultural markets in North America, Asia and Europe will be closely watching encroaching frosts that can damage ripening crops waiting to be harvested. Energy traders will be switching from being concerned about heating degree days to cooling degree days, with air conditioners giving way to heaters as major draws of power and fuels. Ice across the Arctic Ocean is reaching its lowest amount of the year.Fall will probably be mild across a large part of the U.S., with most areas except for the Pacific Northwest and upper Great Plains likely to see warmer-than-normal temperatures through December, according to the U.S. Climate Prediction Center’s seasonal forecast.

In California the next phase of its wildfire season lies just ahead in the calendar. Through Sept. 19, 7,575 fires have consumed 2.3 million acres -- above the five-year average though less than last year’s 3.6 million acres, according to the California Department of Forestry and Fire Protection, commonly called Cal Fire.

The changing season in California brings winds that start blowing out of the east and drive warm dry air across its mountain ranges. Called Diablos in the north and Santa Anas and Sundowners in the south, these winds have been known to spark tremendous blazes across the Golden State.

The trigger for all this is the change in weather patterns that start when summer gives way to autumn and the sun moves across the imaginary equator in the sky. While that takes place Wednesday, don’t expect a perfect 12 hours of sunlight and 12 hours of night. Due to the Earth being more of a blob than a perfect sphere, New Yorkers can expect reach that mark Saturday when the daylight portion of the day will be 12 hours and 49 seconds long, according to Stavanger, Norway-based Time and Date AS’s website.London and Washington will also near their closest approach to a perfect 12-hour day on Saturday as well, with the U.K. capital marking up 11 hours 59 minutes and 57 seconds of daylight while dwellers in the U.S. District of Columbia will have 12:01:03 of daytime.The amount of daylight will begin to grow again on Dec. 22 in New York -- of course it will be another three months of icy rain, snow and cloudy days before spring arrives.