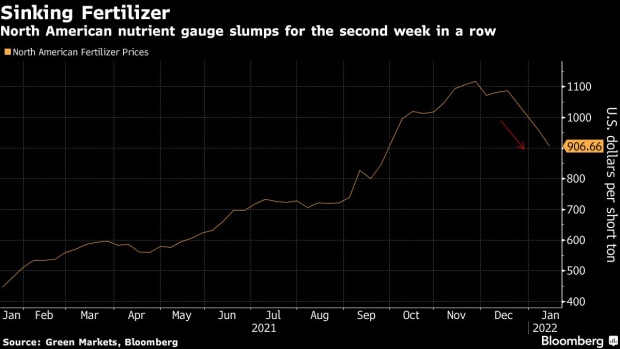 (Bloomberg) -- North American farmers could be looking at less expensive crop nutrients this year, potentially easing the pressure on food costs that have pushed up consumer prices.

The Green Markets North American Fertilizer Price Index, which more than double in 2021, fell 5.2% Friday after spiraling down the most since 2009 last week. Prices for New Orleans urea, a type of nitrogen fertilizer, fell 6.2% to the lowest since October as reports of full warehouses signal “the new price level is here to stay,” said Alexis Maxwell, an analyst at Bloomberg’s Green Markets.

Fertilizer prices soared to repeated records over the last few months, spurred by setbacks including an energy crunch in Europe, unexpected plant closures and halted exports from major suppliers. The increase has stoked concerns over prospects for further food inflation at a time when consumers are already paying more for staples like grains and coffee.

With urea comparatively cheap in the U.S., which is a major importer of all major crop nutrients, “we could even see the U.S. export urea ahead of the spring season,” Maxwell said.

To be sure, farming costs include other inputs that may get even more expensive this year, such as fuel.