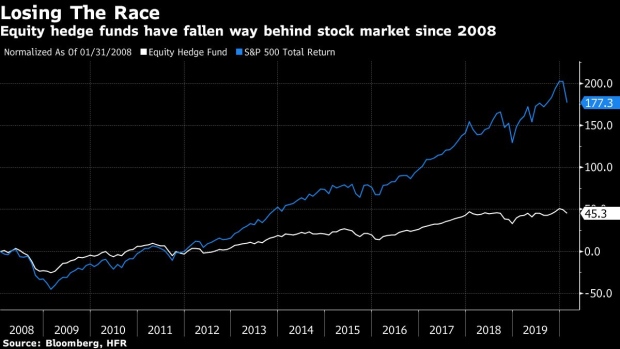 (Bloomberg) -- Hedge fund Lansdowne Partners, formerly revered as one of the world’s star stock pickers, was wrong-footed by the historic bull-run. It fared even worse in last month’s bear market.

The firm’s main hedge fund run by Peter Davies and Jonathon Regis tumbled 13% in March’s rout, the biggest monthly decline since it started trading almost two decades ago, according to an investor update seen by Bloomberg. Its smaller Princay Fund suffered a 35% drop.

The sharp losses pile pressure on London-based Lansdowne, which has seen an investor exodus after lagging both rising and falling markets since 2016. It has cut fees, parked less liquid investments and recently shut a fund as it struggles to reclaim its successful past. The firm’s assets have tumbled by more than $9 billion from a near $22 billion peak five years ago.

A spokesman for the the firm declined to comment on the losses.

Lansdowne’s woes are a wake up call for hedge funds that have the flexibility to bet on and against stocks. At roughly 30% of the industry’s more than $3 trillion in assets, they’ve failed to match a blistering rise in shares that ended last month. Their ability to protect clients in a bear market, the reason why investors pay them hefty fees, was put to test as the spreading coronavirus sparked a sell-off not seen since 2008.

“While easy to be depressed by the last few years, we are incredibly optimistic going into 2020,” the firm wrote in a letter to clients in January addressing its performance.

Lansdowne did anticipate a market reversal this year, but failed to capitalize on it. The main fund ended up losing more than the 12% decline in the S&P 500 index last month, although a 10.8% fall in the Bloomberg Equity Hedge Fund Index indicates peers struggled too.

In recent years, the Lansdowne Developed Markets Fund has rotated its portfolio from growth to value stocks, betting on companies such as miners Rio Tinto Plc and ArcelorMittal SA as well as grocer Tesco Plc, according to investor documents. All three tumbled in the first quarter with ArcelorMittal losing as much as 45%.

The fund also entered the year with just over a third of its assets invested in domestic U.K. equities and 26% parked in airline stocks. Both were crushed as the virus forced much of the world into lockdown.

The fund lost about 23% during the first quarter, continuing its underperformance from last year when it gained just 1.3% versus a 31.5% rise in the S&P 500 Index. That contrasts with a solid record during tough periods: the fund has beaten the S&P 500 in about 83% of the index’s down months since it started trading in August 2001, according to Bloomberg calculations. And in about 40% of those months, it made money.

Lansdowne has kept its main hedge fund closed to new investments for years to make it easier to manage short bets and exposure to relatively less liquid mid-cap stocks. In 2017, it also lowered the management fee to 1% from 1.5% for clients who had invested for 10 years or more.

But years of poor returns have led to outflows with the main fund’s assets dropping to $3.6 billion at the start of March, down from more than $12 billion in 2015, according to an investor document. Firm-wide assets had tumbled to $12.2 billion before the March losses.

The sharp drop in assets has also drawn the attention of one consultant to the fund’s investments in private companies that can’t be liquidated easily. The Developed Markets Fund had about 8% of its assets invested in private companies at the end of September, according to an investor document.

The Lansdowne spokesman said the firm has a track record of managing such investments. Unlike daily-dealing money pools, the hedge fund’s monthly exit options with 90-day notice periods gives it time to liquidate investments should it wish to, he said.

Earlier this year, the firm shut its $585 million long-biased Lansdowne Developed Markets Strategic fund. Clients had the option of taking their cash, transferring their investment into other funds, or to remain invested in its residual portfolio comprising small cap stocks and some unlisted securities.

After consultation with investors last year, “it was concluded that the incremental complexity of a third Developed Markets product was no longer warranted,” the spokesman said. About 84% of clients elected to stay invested in the residual portfolio or transfer to other funds, he added.

Lansdowne now runs more money in long only strategies, according to an investor document. At the start of March, only about 45% of the firm’s assets were in long-short money pools, it showed.

(Updates with investments in private companies in 13th paragraph)