As more and more parents provide financial help to their children to buy a home, one Toronto-based family law firm said it’s seeing an increasing number of clients who are feuding with their kids over gifted down payments.

“I think it's coming to a head because of the state of the housing market for so long,” Kevin Caspersz, senior associate at Shulman & Partners LLP said in an interview Thursday.

As home prices hit new highs across the country, more buyers are tapping the ‘Bank of Mom and Dad’ to get into the real estate market, but that comes with risks.

A recent CIBC Capital Markets report estimated that nearly 30 per cent of first-time homebuyers received financial help from family members over the past year – an increase of about 10 per cent from 2015.

Caspersz said a number of factors need to be discussed between parents and children before these large sums of money change hands including whether the money will need to be repaid and if any interest will be owed, what happens to the money should the child’s marriage or relationship break down and whether the child’s partner is entitled to any portion of the gift.

“It should be spelled out explicitly,” he said. “I think that's the problem that we're starting to see - where parents have not done that…or even between the parties receiving the money - they haven't come to a mutual understanding.”

He said while verbal discussions can take place initially, the agreement should “absolutely be formalized to protect both parties,” since verbal understandings don't provide proof in the event of a legal dispute.

While hammering out a formal agreement might seem complex, Caspersz said it doesn’t have to be – and in the end, it’s an important step in protecting all involved now and down the line.

“It usually has to come up at a time when things are good - parties are entering into a marriage or about to live together as part of their relationship - so you know, it's not an ideal time to bring up that subject matter. But as you point out, it does not have to be complicated,” he said.

“[The agreement] can simply deal with [the gift], and the cohabitation agreement or prenuptial agreement can simply address the loan or the gift, the intention of the parents or the giver, and how the parties understand those funds are being received and more specifically, what is to be done with those funds and how they're to be treated in the case of a breakup of the relationship or marriage.” 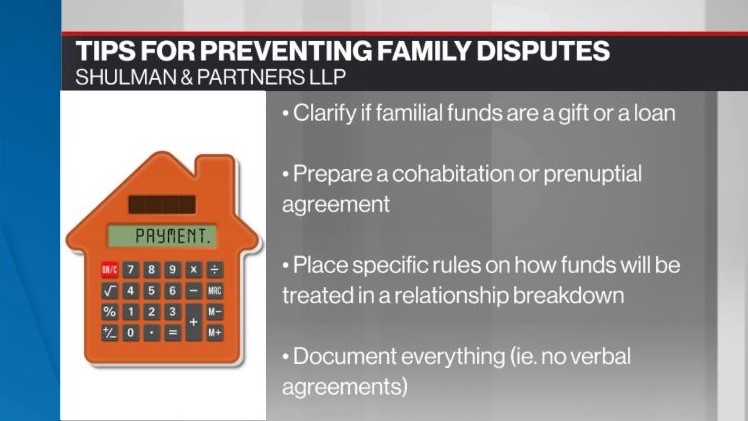