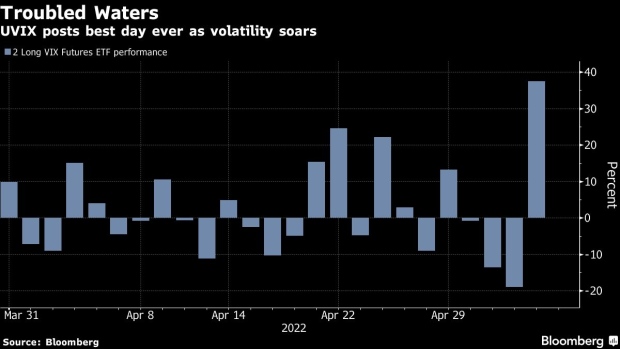 (Bloomberg) -- Two volatility strategies with a controversial history on Wall Street are back in fighting form after another dramatic week in the U.S. stock market.

At one point UVIX, which rises when markets are choppy, surged 42% in Thursday’s rout before closing 37% higher -- the most among any exchange-traded fund in the $6.5 trillion U.S. industry, and 11 percentage points ahead of the second-best performer.

While volatility-linked ETFs carry a degree of infamy after February 2018’s “Volmageddon” episode, the super-charged showing explains why they retain their appeal.

Despite featuring in multiple market meltdowns in previous lives, such products offer an easy way for investors to bet on stock turbulence or calm, often with added leverage.

That was their appeal over the past trading week, which saw the S&P 500 notch its biggest post-Federal Reserve rally in over a decade on Wednesday, only to completely give back those gains within 90 minutes of Thursday’s opening bell.

“Weeks like this are exactly what this product lives for,” said Nate Geraci, founder of advisory firm the ETF Store. “If the wild market swings continue, UVIX will be a hot money magnet. That said, investors should exercise extreme caution with an ETF like this. It’s easy to get quickly and badly scorched.”

SVIX and UVIX are revamped versions of trades that collapsed in the February 2018 “Volmageddon” episode and delisted after Covid turmoil, respectively. Their predecessors, the VelocityShares Daily Inverse VIX Short-Term ETN (XIV) and the VelocityShares Daily 2x VIX Short-Term ETN (then TVIX, now TVIXF), were issued as notes, meaning that they were unsecured debt obligations of the issuer. SVIX and UVIX are ETFs, which are backed by assets.

Still, this past week was a reminder of how sharply volatility-tracking funds can move. SVIX delivers the inverse performance of stock-volatility contracts, so in the three days through Wednesday -- as equities were calm and rising -- it climbed 18%. Then on Thursday as shares sank it retreated almost 17%.

Investors appear undaunted by such violent changes in fortune. Activity in both leveraged and inverse funds is booming across Wall Street, with retail traders thought to be a key driver. SVIX and UVIX boast a combined $55 million in assets after launching at the end of March, with volumes climbing daily.

Regulators, alert to the risks, are circling, with both the Securities and Exchange Commission and the Financial Industry Regulatory Authority mulling new regulations to clampdown on what they term “complex” products.

To help gain approval for UVIX and SVIX, issuer Volatility Shares made crucial tweaks to the strategies that should make them less risky. That includes a time-weighted average price to set closing values, rather than the 4 p.m. VIX settlement price, designed to avoid creating a spike of trading activity at the closing bell.

All told this week’s huge moves have shown they can pack a punch.

“I am not shocked these two have been successful,” said Eric Balchunas, ETF analyst with Bloomberg Intelligence. “Certain investors crave the juice that a 2x VIX ETF can provide despite the many dangers.”