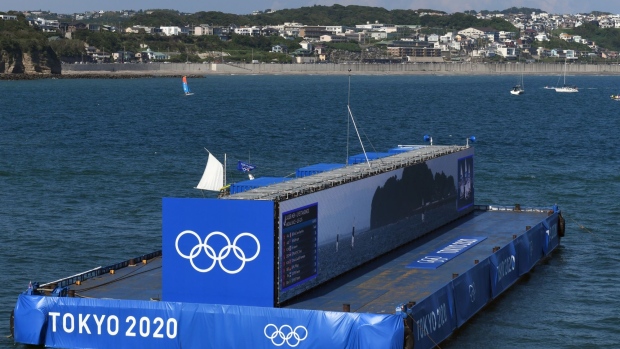 (Bloomberg) -- The Tokyo Olympic and Paralympic Games were meant to be the perfect stage for Japanese and other tech firms to showcase their latest technologies to the world. A year late and without fans allowed in due to the pandemic, the show has lost much of that luster, but some undeterred companies are making a push to turn the experience of navigating the Covid challenge into a legacy for the games.

An enormous, 55-meter wide (180-foot wide) display floats in Sagami Bay, with the majestic Mount Fuji as its background. It provides a real-time video feed of Olympic sailing races, replacing what would have been a 3,000-spectator event requiring binoculars. Without access to the public, it’s now serving as the primary monitor for officials to see the competition and athletes and families to cheer on the competitors. In a collaboration between Intel Corp., Nippon Telegraph & Telephone Corp. and NTT Docomo Inc., the screen gets its video from 4K cameras mounted on drones beaming down 5G wireless signals.

Shingo Kinoshita, who led the development of the giant screen at NTT’s laboratory, also developed a holographic system for projecting live badminton games in three dimensions at a venue miles away from the action. The system would have given the remote audience a sense of watching the contest in person, but the plan was canceled due to the pandemic.

Kinoshita believes, even while his novel systems didn’t get their proper showcase, that the Olympics were still key in giving him the opportunity and funding to work on such projects. The remote streaming and holographic technologies may yet be used at public events, such as to project audiences into a performance space like a concert or to let fans worldwide to enjoy an event at the same time.

The Tokyo Organizing Committee said it wants to create the “most innovative games in history” through its adoption of top-class technology in venue maintenance and event management. That’s required a multiyear, multilateral collaboration. In 2017, the Innovation Promotion Office was set up and has been working with NTT, Panasonic Corp., Intel, Alibaba Group Holding Ltd., Toyota Motor Corp. and others to explore new ways of showing sports.

Keiichi Koshiba, director of audio and video planning for the venture, said the Olympics created a space to accumulate and share knowledge and technology across various companies, which he deemed of great value and something that may be turned into a legacy of the games.

The most memorable sight of the July 23 opening ceremony was a light show in the night sky over Japan’s National Stadium conducted by a swarm of 1,824 LED-equipped Intel drones. Among their gyrations, they depicted the checkerboard logo of the Tokyo 2020 games as well as a 3-D blue Earth. Intel worked closely with the organizing committee to develop the program and adapt it to the change of plans brought on by the pandemic.

Rick Echevarria, general manager of Intel’s Olympic program, said it was extremely challenging to conduct the wirelessly coordinated tech showcase in the confined space of Tokyo’s city center, where electromagnetic waves of various frequencies abound. The company conducted four rehearsals in the city before it could be sure the drones would execute their duties without fail.

Panasonic’s latest projector offered a performance of live dancers intertwined with projection-mapped red strings during the opening ceremony. Yusuke Yamamoto, who was in charge of the development, went through a lot of trial and error in a limited time in order to achieve the proper effect.

As a result of cross-organizational tech development under the banner of the Olympics, building the finished product was achieved in one year, shaving six months off the time usually required, Yamamoto said. Conducting tests at the National Stadium in May let the team confirm the effects of exposure to rain and wind, laying the foundation for future deployments of the technology and business offerings.

The primary tools for experiencing the games under a spectator-free Olympics regime are TV broadcasts and official video-streaming websites, escalating the pressure on producers to ensure smooth and uninterrupted output. “It was the most challenging experience filled with anxiety,” said Ayuta Onishi, in charge of the broadcasting systems at Panasonic for this year’s games. Panasonic has been the lead company responsible for handling Olympics broadcasts since the 1998 Barcelona Games.

Travel restrictions prevented overseas engineers from coming in to conduct tests in person and additional venue entry restrictions made it impossible for Onishi to be certain that images would go out without any trouble. With almost 9,500 hours of broadcasting in Tokyo 2020, 30% increase from Rio 2016, Panasonic still went ahead with a full-scale 4K broadcasting schedule and delivered it across the full range of 339 sports in the games.

Alibaba Cloud’s so-called Digital Pins, which were available at media and broadcast centers, have proven surprisingly popular. By simply tapping the pins together, users can exchange contact information on social networking sites. In the media center, where around 16,000 workers including journalists, broadcasting operators and engineers gather, people were seen tapping the pins to each other.

Alibaba Cloud also provided a system to monitor the risk of heat-stroke among convention staff in real time. A device worn in the ear monitors each individual’s body temperatures and heart rates, and when combined with data on the ambient temperature, humidity and solar radiation levels at each venue, it produces an alert advising staff to rehydrate when appropriate.