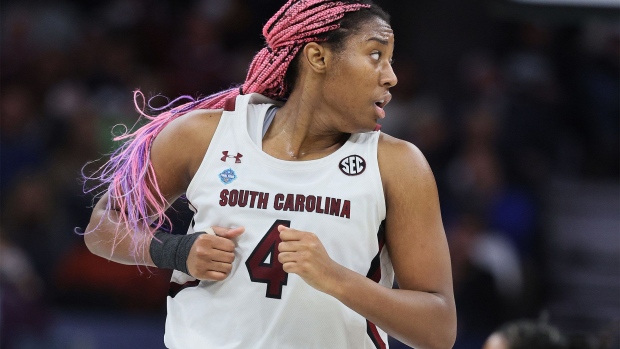 (Bloomberg) -- Fanatics Inc. has signed deals with more than 100 universities as it moves aggressively into the college-sports trading-card market.

In recent months, Fanatics has quietly gone around the nation to negotiate these arrangements school by school in an effort to muster a comprehensive NCAA lineup. It also signed agreements with more than 200 student-athletes, such as Alabama quarterback and Heisman Trophy winner Bryce Young and South Carolina basketball star Aliyah Boston.

Fanatics added rights from the majority of the schools in the top five conferences, including exclusive long-term deals with Alabama, Georgia, Michigan, Texas A&M, Kentucky and Kansas that begin as early as 2023. Initial cards from nonexclusive deals with institutions such as Duke, North Carolina, Syracuse and Oklahoma will be released first under its Topps subsidiary’s Bowman U brand for football and men’s and women’s basketball.

College athletes have been able to sign deals for their name, image and likeness since last July after the NCAA changed its rules, and by securing deals with both current players and their schools, Fanatics is able to put all the appropriate trademarks on the cards. Collegiate collections have been sold for years, but companies previously had to wait until athletes left school. Last year, rival Panini SpA signed a deal with marketing firm OneTeam Partners for group licensing of college athletes who opt into that service.

“Fanatics has been closely monitoring the ever-evolving NIL landscape, and we felt this was the perfect time to launch multiple, strategic college trading card programs,” Derek Eiler, executive vice president of Fanatics College, said in a statement.

Chief Executive Officer Michael Rubin barreled into the trading-card industry last year as part of a push to expand beyond Fanatics’ roots as an apparel merchandiser, adding card licensing deals across football, basketball and baseball. Trading cards have been a red-hot alternative asset in recent years, with prices for cards rising immensely as investors flocked to the hobby.

Fanatics’ card business was valued at $10.4 billion last September, after a $350 million funding round led by entertainment company Endeavor Group Holdings Inc., private equity firm Silver Lake and venture capital firm Insight Venture Partners. In January, Fanatics acquired Topps for about $500 million and added its 350 employees to fast-track its growth in the sector.

Management wants to operate a portfolio of trading-card brands under the Fanatics Collectibles umbrella. In March, it debuted its first new label — a brand called Zerocool, focused on a pop culture and entertainment — and said it’s looking to sign licensing deals with production studios, musicians and fashion houses.