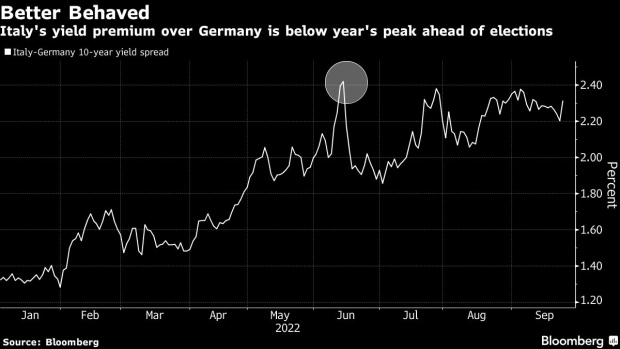 Giorgia Meloni, leader of Brothers of Italy party, speaks during a general election campaign rally by right-wing coalition made up of Brothers of Italy, Forza Italia, and League parties, in Rome, Italy, on Thursday, Sept. 22, 2022. Italy's right-wing coalition would not seek an overhaul of the country's plan for spending European Union recovery funds, a leading member of the alliance said as investors closely watch Sunday's elections. , Bloomberg

(Bloomberg) -- Italian voters are expected to propel Giorgia Meloni toward the premiership Sunday, which would make her the country’s first female and first far-right prime minister since it became a republic.

Meloni, leader of the Brothers of Italy party, is favorite to win the general elections at the head of a right-wing coalition, according to opinion polls published before a blackout period.

While political maneuvering to form a government after a vote has dragged on for an average of 45 days in recent times, the winners will have no time to waste. Investors and foreign partners are watching closely, with the euro area’s third-biggest economy hit by Russia’s invasion of Ukraine, spiking energy prices and rising interest rates.

Meloni has repeatedly sought to calm fears she would challenge European Union rules designed to keep deficits in check, or jeopardize almost 200 billion euros ($196 billion) in recovery funds from the bloc by seeking to renegotiate some of the terms. Any change in Italy’s pro-EU stance could exacerbate fears about the country’s colossal debt burden.

At noon, turnout of 19.1% was in line with the 19.5% reported at the same time during the last general election in 2018, Interior Ministry figures representing 95% of towns showed.

The first exit polls are due when voting ends at 11 p.m. Rome time on Sunday, with results following through the night. Meloni’s alliance includes Matteo Salvini of the anti-migrant League and Silvio Berlusconi of the center-right Forza Italia.

The talks to forge a new administration will come after Italy held its first-ever election in the fall, the period when governments have to draft the budget law for approval by year-end.

Meloni’s reassuring messages have kept Italy’s risk premium contained. The spread between Italian and Germany government bonds, a barometer of debt risk, has widened by only 15 basis points since July 19 -- the day before outgoing premier Mario Draghi announced his resignation.

Meloni’s slight government experience could however exacerbate the challenge ahead.

“The probability that Brothers of Italy will lead Italy’s next government is very high,” said Martina Carone, a political analyst at YouTrend. “For investors, any government she will form will be less credible compared to the outgoing one, but this is also why she will do as much as she can to act up.”

Among the first steps in forging a new administration will be consultations with parties led by Sergio Mattarella, whose task it is to pick a premier-designate before a parliamentary vote to verify majority backing. The new parliament, which has been downsized to 200 senators and 400 lower house lawmakers, will meet on Oct. 13 to elect the speakers of both houses.

“In the middle of October we will see what the chemistry looks like within the right-wing coalition,” Francesco Galietti, a political analyst at Policy Sonar in Rome, told Bloomberg TV on Friday. “Because you want to see how Meloni deals with Salvini and Berlusconi, who becomes the speaker of the senate, who becomes the speaker of the house, that would be a good indicator.”

Meloni’s policy agenda includes a flat tax, although she disagrees with her allies on the level at what it should be set. She would also seek to protect Italian companies from foreign take-overs, and oppose an expansion of LGBT and civil rights.

Adding to the political uncertainty, it is not clear to what extent a Meloni coalition lead would yield a big majority of seats, because of Italy’s complex electoral system. Some projections before the blackout period estimated the right-wing bloc could win a two-thirds majority of seats in both houses of parliament, enough to change Italy’s constitution.

Ex-premier Giuseppe Conte saw his anti-establishment Five Star Movement surge in the last available polls, boosted by the promise of maintaining a so-called citizen’s income, an unemployment benefit which resonates in the south of the country.

“While it is very unlikely that the right-wing coalition doesn’t reach a majority of seats, there is substantial uncertainty about the distribution of votes within the coalition,” JPMorgan’s Marco Protopapa and Aditya Chordia wrote in a note to clients on Sept. 21. A bad result by Salvini’s League would give him “modest bargaining power” to challenge Meloni’s recent moderate shift, they said.

A big majority by the right-wing bloc close to two-thirds of seats could be “a negative surprise for markets” which would price in “increasing risk of erratic policy making and mis-communication’” JPMorgan said.