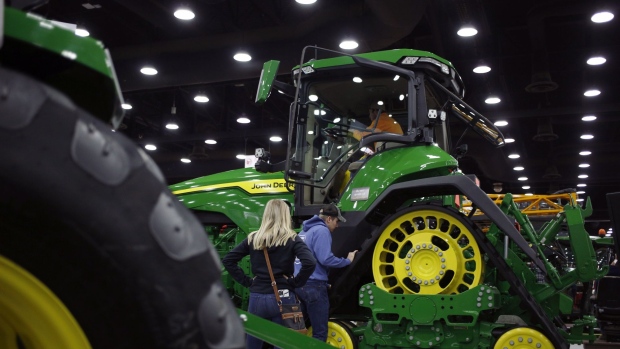 (Bloomberg) -- Uncertainty is plaguing U.S. farmers with a pandemic disrupting demand and a China trade deal up in the air. Still, they seemingly have no issue splurging on high-tech machinery, boosting Deere & Co.’s orders for some of its most profitable products.

Current orders for the high-horsepower tractors built at its Waterloo, Iowa plant -- Deere’s top moneymakers -- are up 10% from a year ago, executives said. That compares with an 18% drop in total agricultural sales.

Advances in technology mean farmers are turning to the newest, most expensive equipment for low-cost production and to replace the oldest fleet of tractors in more than a decade.

Deere and its customers are betting on “precision agriculture,” farming’s version of big data, to achieve the next level of efficiency gains in crop production. Modern tractors have evolved into machines containing massive computers that connect with systems that can plant, spray, fertilize and harvest at optimal times with as little waste as possible.

“The feature-rich, latest-and-greatest machines do a lot to improve farmers’ revenues, save money and boost yield,” said Matt Arnold, an analyst at Edward Jones. “There’s so much return on the investment that we’re seeing adoption even though it’s not a good time to give up sizable pieces of capital.”

Although Deere predicted a 10-15% dip in worldwide agriculture equipment sales, Arnold said the underlying demand to replace aging fleets with high-tech equipment blunted what could have been a much sharper decline at a time when the machinery industry isn’t showing much resiliency.