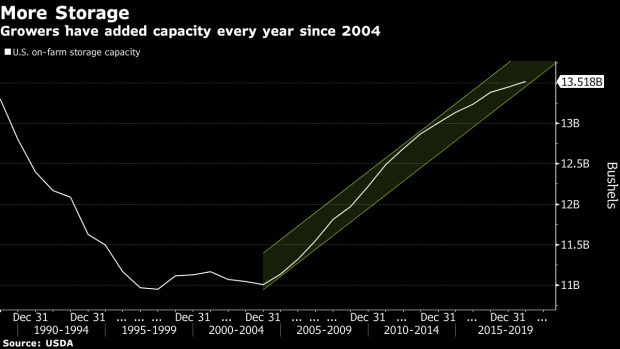 Soybeans are unloaded onto a truck in Tiskilwa, Illinois, U.S., on Thursday, Sept. 27, 2018. Having all three North American countries agree on a trade deal has given traders and farmers reassurance that some flows of agricultural goods won't be disrupted, particularly to Mexico, a major buyer of U.S. corn, soybeans, pork and cheese. Photographer: Daniel Acker/Bloomberg , Bloomberg

(Bloomberg) -- American farmers in disbelief over the U.S. Department of Agriculture’s relatively lofty projections for crop production are vowing to put off harvest-time sales until prices recover from recent lows.

Corn futures that surged mid-year as record rains interrupted U.S. planting have slumped back to where they started thanks largely to government yield estimates that indicate crops stood up to the weather better than feared. The next batch of USDA numbers will be released Thursday at noon in Washington.

The price retreat is a blow to growers reeling from the loss of their top soybean buyer, China, as the trade war drags into a second year. Now as harvest approaches, some farmers are set for a standoff.

Growers have added on-farm storage capacity every year since 2004, with total farmer storage reaching a record 13.5 billion bushels last year, according to USDA data. And with record amounts of corn and soybeans unplanted this year due to spring flooding, there should be extra room in bins for unsold grain.

“Farmers don’t think the crop is out there,” Ben Riensche, who works more than 10,000 acres (4,000 hectares) in Jesup, Iowa, said by telephone. “We are going to make them beg for it. We are going to lock the bin doors and weld them shut.”

Riensche just finished building a new grain bin that adds 50,000 bushels of storage to his existing capacity footprint of a “couple of million bushels.” Rising differentials for grain in some U.S. cash markets suggest commercial handlers are worried about supplies falling short, he said.

“In years past, you grow soybeans to sell them, so let’s get them on the boat as quick as we can,” he said. That will not be the case this year. With more growers having storage, “farmers are their own disruptors. ”

Matt Campbell, risk management consultant at brokerage INTL FCStone in Des Moines, Iowa, estimates that farmer sales of corn through August are 22% below the same period last year. While he doesn’t have similar data on soybeans, sales of the oilseed also are lagging.

Farmers will look to fill storage both on the farm and at commercial elevators first, before looking to sell what can’t be stored. “They don’t have that comfort on the crop size and with prices being so low,” Campbell said.

--With assistance from Millie Munshi and Dominic Carey.

To contact the editors responsible for this story: James Attwood at jattwood3@bloomberg.net, Pratish Narayanan