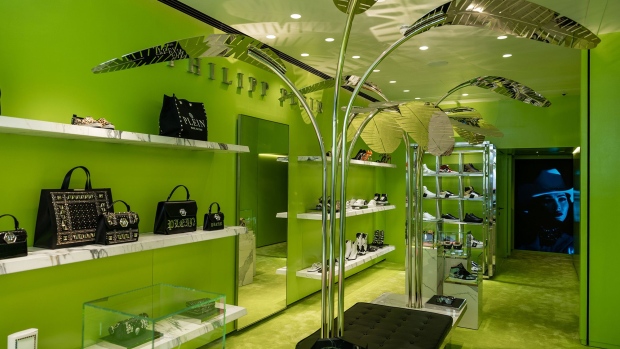 (Bloomberg) -- German fashion designer Philipp Plein, whose online store started accepting cryptocurrencies in August, expects purchases made with digital tokens to surge this year even after a steep drop in prices of such assets.

Plein expects purchases using crypto to reach 15 million euros ($15.8 million) to 20 million euros in 2022, he said in an interview with Bloomberg Television on Friday. Last year, such payments accounted for some 3% of Plein’s roughly 100 million euros of online revenue.

Plein’s forecast hints at potential growth opportunities for retailers as digital assets gain more mainstream appeal. Cryptocurrency adoption among retailers has been held back by technical constraints and the volatile nature of digital coins -- Bitcoin has lost more than 40% from a November peak and most other tokens have suffered even larger declines.

“We saw that there was a big audience within the crypto community itself, so we gained a lot of new clients,” by adding cryptocurrencies as a mode of payment, Plein said.

When Plein started accepting cryptocurrencies in August, Bitcoin had just started a rally that would see it peak at close to $69,000 three months later. The biggest token has since fallen to just under $39,000.

The Swiss designer’s eponymous company now accepts 25 tokens -- including Bitcoin and Ether -- as means of payment, up from 15 in August. Starting this week, customers at its store in London’s Mayfair district can pay with crypto. Plein, known for extravagant fashion shows featuring robots, luxury cars and helicopters, said he personally owns 170 Bitcoin, worth about $6.6 million at current prices.