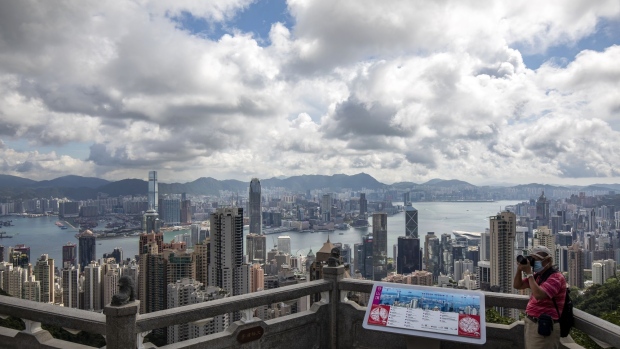 A person takes a photograph of the city's skyline on a viewing terrace at Victoria Peak in Hong Kong, China, on Wednesday, May, 26, 2021. Hong Kong's unemployment rate fell for a second straight month in April as the city slowly emerges from an extended slump fueled by the pandemic and social unrest. Photographer: Paul Yeung/Bloomberg , Bloomberg

(Bloomberg) -- SML Group Ltd., a garment label maker for fashion and retailers, is weighing a Hong Kong initial public offering as soon as next year, according to people familiar with the matter.

The Hong Kong-based company is working with an adviser on the share sale, said the people, who asked not to be identified as the discussions are private. The offering could raise about $200 million, one of the people said.

A listing would come more than a year after SML worked with Citigroup Inc. to explore a sale, which attracted private equity funds including Affinity Equity Partners and FountainVest Partners, Bloomberg News reported at that time. A disposal could have fetched about $500 million, the people familiar with the matter had said.

SML designs and makes woven and printed labels, price tickets and packaging, according to its website. Founded in a warehouse office with 10 people in 1985, the company has since expanded both organically and via acquisitions. It counts offices and production sites in 30 countries including the U.S., Mexico, Spain and Indonesia.

Considerations are at an early stage and details of the IPO could still change, the people said. A representative for SML didn’t immediately respond to requests for comment.