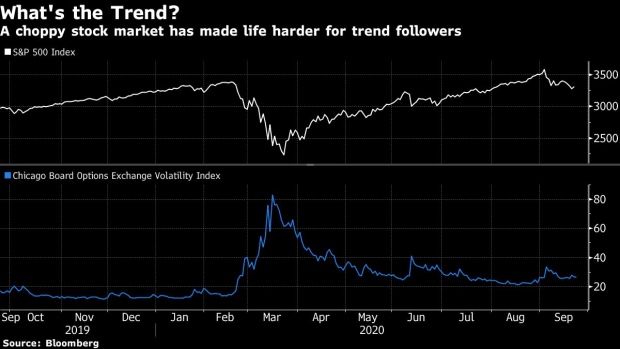 (Bloomberg) -- Quants who make money riding cross-asset trends are being whipsawed as risky securities sway from meltdowns to melt-ups like never before.

A mix of market whiplash followed by directionless trading of late means a Societe Generale SA benchmark for the investing group known as commodity trading advisers is down 2.5% this year. By contrast, their peers are up 1.6%, according to a Hedge Fund Research index.

Market reversals keep stacking up. The S&P 500 Index notched a fresh record this month, only for the gauge to flirt with correction territory earlier this week. After a big surge in the first quarter, Treasuries have moved sideways ever since. Even the dollar’s reliable downtrend this year appears to be over for now, while oil has stayed stuck in a range since its April plunge.

Now, the quant community is locked in debate over whether it’s time to make their algorithms more reactive to febrile shifts in market momentum. The worry is that such moves could cause investors to over-react to rallies and sell-offs that prove fleeting.

Making computer programs more responsive to cross-asset moves is contentious in an industry that prides itself on all-weather trading strategies. Yet CTAs have underperformed their hedge fund peers for more than a decade, and figuring out sustained trends is only getting harder.

The Dutch CTA has been refining its systems so that it is less prone to overestimating risk after a spike in volatility. The ferocious return of the bull market after the March maelstrom has only convinced the fund to further strengthen these adjustments.

At the time, volatility-based risk controls prompted many quants to dial back exposures, causing them to miss out on the 60% jump in the S&P 500 over the next six months. By contrast, Transtrend turned long on equities in early May and it remains net positive on the asset class.

Wall Street strategists have pointed out that despite lower volatility, credit and stocks have seen more abnormal moves -- or fatter tails, in statistical parlance -- in recent years.

That’s a bane for trend followers because many of them use a medium-term time horizon of about a few weeks to months to determine momentum. As markets get more manic, quant firm Research Affiliates argued in a paper this year that short- and long-term indicators tracked by CTAS are ever-more in conflict.

At Fort LP in New York, its CTA model has dealt with this by reacting less to abrupt pullbacks in stocks. Already, the September swoon appears to be over for now, as U.S. stocks look poised to notch a second straight day of gains in Wednesday trading.

“The model has observed and learned over the past few years that any corrections to the sustained, largely one-way trend in equity markets have been brief, sharp, and without follow-through,” said Sara Wolkoff, head of investor relations at the $6 billion manager.

Meanwhile, the Allianz Multi-Asset Long/Short fund is considering riding short-term trends temporarily, among other options, according to fund manager Rahul Malhotra. But he rejects the notion that shortening the time horizon is a permanent fix for CTAs, since a medium-term program still does better over the long haul.

All told, the Allianz manager is keeping faith with the investing style, which is backed by decades of research on how investor herding, among other factors, means assets tend to trade in one direction over a protracted period.

“In the last few years, especially this year, you’ve had exogenous events which have caused 180-degree turns in the market,” he said. “It does not mean that the long-term risk premia that you can get from trend following has gone away.”