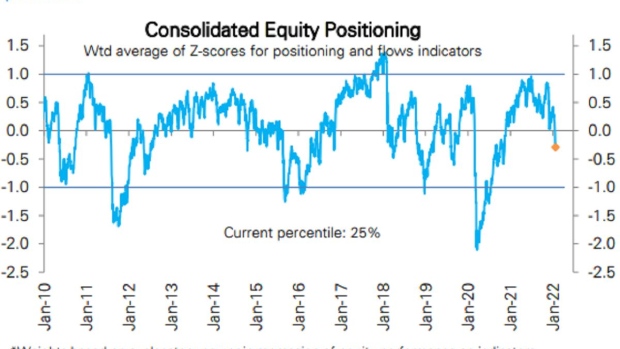 (Bloomberg) -- Evidence is piling up that professional speculators are now betting that the historic new-year stock rout has reached a tentative peak.

Take hedge-fund activity in the manic Monday session. When the S&P 500 wiped out an intraday loss of nearly 4%, the fast money tracked by Morgan Stanley duly cut their short positions at the fastest clip in a year.

Goldman Sachs Group Inc. clients also rushed to close out bearish exposures at the fifth-largest rate in the past five years. The deleveraging was mostly concentrated in the world of exchange-traded funds.

So while hedging demand in one form or another remains elevated by last year’s standards, a cohort of investors is cutting their protective buffers -- in a bullish sign for the Wednesday stock rebound ahead of the Federal Reserve meeting.

“It seems like there has been a decent amount of short-covering,” said Stuart Kaiser, head of equity derivatives research at UBS Group AG. “The feeling is that net exposure is higher but gross exposure hasn’t moved much this week, so that would imply some shorts getting covered.”

Hedge funds cut ETF short wagers cross the board in the Monday market roller-coaster, making the biggest single-day reduction since October 2020, the Goldman analysis also shows. Meanwhile, bearish bets against the world’s largest passive product appear to have fallen. Put open interest on the $406 billion SPDR S&P 500 ETF Trust (ticker SPY) has dropped near a 2014 low -- dragging the ETF’s put-call open interest ratio to the lowest levels since around March 2021.

Still, Kaiser warns of more market upheaval even after two days of historic whiplash in the S&P 500.

“We may stabilize a bit, but the risks are still in place,” he said.

After the rate-spurred market selloff, traders of all stripes are taking a breather. A JPMorgan Chase & Co. client survey shows Treasury shorts have also dropped with more investors shifting into a neutral stance.

In the options markets, investors are still buying “catastrophe protection,” according to Amy Wu Silverman of RBC Capital Markets. While skew on the S&P 500 -- the cost difference between the index’s puts versus calls -- is still relatively low for a move of about 10%, it’s getting more expensive to cushion against another historic rout.

Meanwhile, investors have plenty of ammo to rebuild their long exposures. The latest data on fund flows and positioning compiled by Deutsche Bank AG suggest that stock pickers and computer-driven traders are underweight for the first time since November 2020.

With positioning having been flushed, the stage is set for a market recovery, in part thanks to corporate buybacks after the pre-earnings blackout period ends, according to Deutsche Bank.

“While positioning can fall further, driving equities even lower, we think that will require incremental negative catalysts,” strategists including Binky Chadha and Parag Thatte wrote in a note. “As earnings season ramps up, the demand-supply for equities remains strong.”