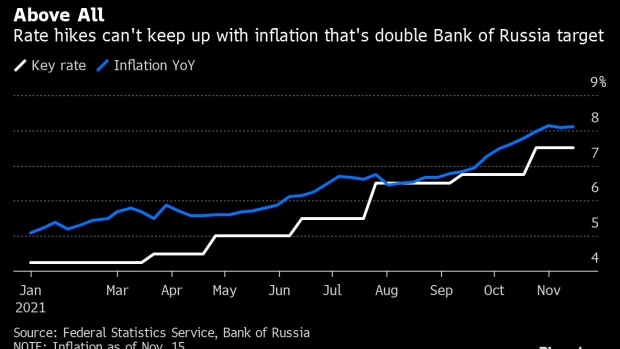 (Bloomberg) -- Russian inflation accelerated for a second week as the ruble’s slump piled pressure on the central bank for another substantial interest-rate hike at its December meeting.

Consumer prices rose 0.2% in the week ended Nov. 22, the Federal Statistics Service said Wednesday evening. That compares with a 0.18% pace in the previous period and puts the year-to-date rate at 7.2%. The ruble has tumbled almost 3% against the dollar in the past five days after the latest flareup in tensions with Ukraine.

With the last rates meeting of the year approaching, traders are poring over Russia’s weekly data for signs that Elvira Nabiullina -- one of the first central bank chiefs to tighten policy in emerging markets this year -- is getting a handle on price growth. The concern now is that ruble weakness, driven by souring geopolitics, will keep the inflation rate entrenched at its highest in more than half a decade.

“Given the importance of the FX channel, they have to react to the weaker ruble, which brings geopolitics into monetary policy, where it does not belong” said Viktor Szabo, a fund manager at Aberdeen Asset Management in London.

Last week, Nabiullina warned of “serious risks” of an inflationary spiral taking hold and compared Russia’s situation to that of Germany and the U.S. in the 1970s. Kirill Tremasov, head of the monetary policy department, said the central bank will act “decisively” to cool inflation and is weighing “a wide range” of options for the next meeting on Dec. 17.

Derivative traders are paying heed. Forward-rate agreements currently point to more than 150 basis points of tightening in the next three months. The central bank has raised rates by 325 basis points so far this year, delivering a 75 basis-point increase in October that was three times the size of the hike predicted by economists.

“We will see the rate-exchange impact in the food prices in a matter of weeks,” said Natalia Orlova, chief economist at Alfa-Bank in Moscow.