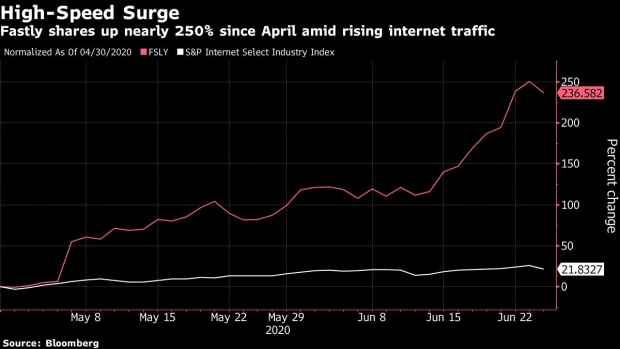 (Bloomberg) -- America’s obsession with the internet is paying dividends to the companies that power websites for everything from shopping to social media.

One of the biggest winners has been Fastly Inc., which has added nearly $6 billion in market value in less than two months, outpacing hot e-commerce stocks like Overstock.com Inc., Wayfair Inc. and Etsy Inc. since the end of April. The stock has gained nearly 250% in that time, making it the best performer among 43 companies in the S&P Internet Select Industry Index.

The content delivery network has become something of a software darling since it posted an outsize earnings beat in early May and boosted its 2020 sales guidance on increased internet traffic as a result of stay-at-home measures. The shares tripling since then suggests the demand has been even greater than expected, according to D.A. Davidson analyst Rishi Jaluria.

“Consider who Fastly’s customers are and how well they are doing in this environment,” Jaluria said in an interview. “Shopify is going gangbusters, as is Slack and Github, critical tools that enable remote workers.”

Content delivery networks make the internet go, using a distributed network of proxy servers and data centers to push speedy internet content in front of consumers whether they’re buying cases of beer on Shopify, or loading videos on TikTok.

TikTok could become a big source of revenue for Fastly as the short-form media platform rises among the social-networking ranks, according to analysts. TikTok parent ByteDance “spends a sizable amount” with third-party content delivery networks like Fastly, Akamai Technologies Inc. and Limelight Networks Inc., Raymond James analyst Robert Majek said in a report following an industry conference earlier this month.

Reddit, Spotify and Pinterest are also Fastly customers. The company’s sales totaled $200 million last year, and Wall Street analysts expect to see more than 40% in growth this year and nearly 30% in 2021. Jaluria estimates that annual revenue will grow 25% to 30% for the next several years.

Fastly appears to be taking greater wallet share relative to other more established rivals, the analyst added, though Fastly is starting from a lower baseline after its initial public offering in May 2019. A big uptick in spending from just one customer moves the needle more for a company of Fastly’s size compared to Akamai, whose deal with Disney+ last year, while meaningful, didn’t do much for near-term incremental sales growth, Jaluria said. Akamai’s market value at $16.3 billion is more than double Fastly’s $7.5 billion.

The risk for Fastly is “taking the foot off the pedal,” because when companies get big enough, they build their own content delivery network as Netflix, Apple, and Facebook have all done, the analyst said. The company took advantage of the recent surge in the shares to tap investors for more cash through an additional equity offering.

Jaluria has a buy rating on Fastly and a Street-high price target of $55, which is below where shares are currently trading. All but two of the 11 analysts tracked by Bloomberg recommend buying shares even though their average target is 48% below the current price.

“Valuations are steep, but Fastly is a unique company with a long runway of growth,” Jaluria said.