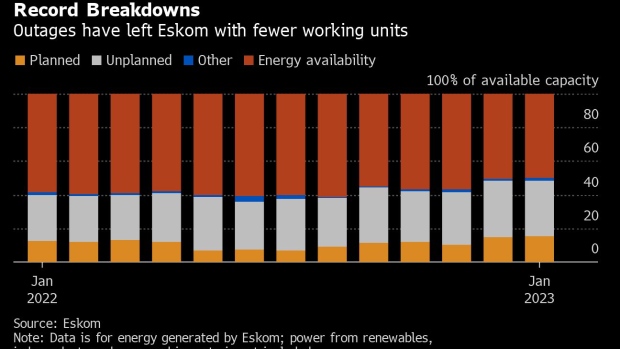 (Bloomberg) -- Astral Foods Ltd., one of South Africa’s biggest chicken producers by revenue, expects its poultry division to incur “significant losses” in the first half of its financial year because of incessant power cuts and high input prices.

Astral couldn’t raise prices as required and “continues to subsidize the increased cost of production to our customer base,” the poultry producer said in a statement on Wednesday. The blackouts — known locally as load-shedding — have delayed slaughtering of birds resulting in heavier and older poultry, according to the statement.

“Load-shedding means that the company can’t process the inflow fast enough and the birds are now growing older than 40 days,” boosting feed costs, said Keenen Du Toit, an analyst at Afrifocus Securities Ltd. “In the longer run, selling prices on the shelves have to go up. If not then food security for South Africa’s most consumed meat is at risk of under-supply.”

Companies in Africa’s most industrialized nation are suffering as state-owned power utility Eskom Holdings SOC Ltd. rations electricity. The firm has enforced blackouts for 87 consecutive days, with up to 12 hours of daily outages earlier this month. The blackouts have forced poultry producers such as Astral to spend additional money on backup energy and in some cases pause round-the-clock operations for long periods, resulting in backlogs and production cutbacks.

Astral said the cost to produce chicken now exceeds the selling price by at least 2 rand ($0.12) per kilogram. That resulted in the group, which also produces and sells animal feed, warning that its overall earnings per share for the six months through March may drop as much as 90%.

Astral — owner of brands such as Country Fair and Goldi Chicken — has also placed a large portion of a planned 737 million-rand capital expenditure on hold due to the current adverse market conditions, it said. The group has committed funds toward backup electricity generation solutions to reduce the impact of blackouts.