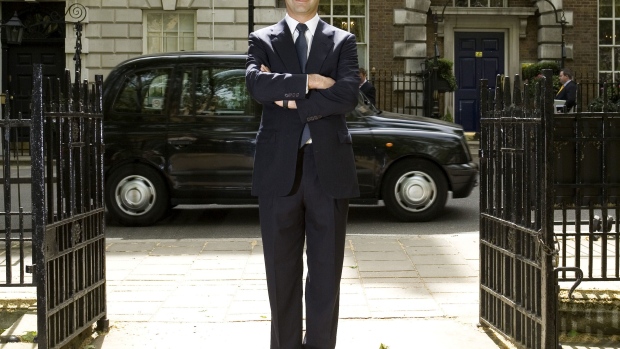 Cevdet Caner in the Mayfair district of London, U.K., on May 12, 2009. Photographer: Chris Ratcliffe/Bloomberg , BLOOMBERG NEWS

(Bloomberg) -- For a flavor of how property mogul Cevdet Caner likes to schmooze potential business partners it’s worth going back to summer 2009.

Just a year after the banking crisis, and the collapse of his Level One real-estate empire, the Austrian whisked a bunch of financiers and property tycoons from Cannes to Saint-Tropez on his speedboat, according to people present who wanted to remain anonymous when discussing sensitive matters. Grabbing the wheel from the skipper, he took everyone to Club 55, a hotspot for celebrities and royals. After being joined there by more moneyed types, they racked up a champagne tab of tens of thousands of euros, the people say.

It’s a modus operandi familiar to those who’ve worked over the past decade with Adler, the flailing property firm that’s part-owned by Caner’s wife and which the tycoon advised in the past. Parties on the Cote d’Azur and yacht trips were some of the ways it tried to impress the finance folks who backed its rise from obscurity — with 50 million euros ($51 million) of real estate in 2013 — to a position as one of Germany’s top landlords, people who know the firm well but who requested anonymity say.

More important to securing Adler’s access to financial markets than those trips were the estimated $120 million of rolling fees paid to the blue-chip banks who assisted the firm and its subsidiaries in selling 8 billion euros of bonds between 2017 and 2021, based on figures in debt prospectuses. The rewards on offer to JPMorgan Chase & Co, Deutsche Bank AG, Barclays Plc and Goldman Sachs Group Inc. were higher than usual for this kind of work.

Now, many of the investors who bought those bonds have cause for regret. Adler is fighting for survival after a short seller and a whistle-blower said it was built on systemic fraud, an allegation it denies. Its shares have plunged more than 80% in a year and the debt that Wall Street helped sell is trading at deeply distressed levels. Last week, German regulator BaFin accused the firm of overstating a key asset’s value, a ruling Adler said it would appeal.

The banks have swiftly cut their exposure; JPMorgan and Goldman Sachs have even placed bets on the firm’s bonds falling and it defaulting on its debts. But fund managers such as Schroders Plc, BlackRock Inc. and Pimco together stand to lose hundreds of millions of dollars on Adler. A few creditors, including hedge fund GLG Partners, have appointed lawyers to help them recoup money.

“For a company to accumulate that amount of debt in such little time harks back to the financial crisis where there was too much risk in the system and investors became overexposed,” says Nicholas Ryder, a professor at Cardiff University. “The banks may have dropped the ball somewhere to have exposed investors to that much debt.”

With central banks opening the money pumps after the 2008 financial meltdown, plenty of real-estate firms amassed huge debt piles to pay for swelling portfolios. But Adler expanded faster than most, and it didn’t just rely on record-low interest rates to build its empire; it also leaned on its network of financiers and bankers and sometimes on their Caner relationships.

The Austrian, who was for years under criminal investigation over Level One before being acquitted in 2020, has always sought to distance himself from Adler. Nevertheless, a recent KPMG audit commissioned by Adler to examine the fraud allegations shows his intimate involvement in its running, including chairing meetings, consulting on salaries and putting together deals.

Caner said in a statement after the audit’s release that he was “pleased to see that KPMG’s forensic report on Adler Group rebutted the financially and reputationally damaging allegations.”

The entrepreneur had bank connections stretching back to his Level One days. One of them, Tomas de Vargas, played an important part in Adler’s rise. De Vargas had advised Caner’s Level One on debt restructuring after it collapsed in 2008, owing creditors 1.2 billion euros. About five years later, the former investment banker took over responsibility for Adler’s capital markets activities, rising to co-chief executive officer in 2017.

Until 2013, Adler Real Estate had a small portfolio of German residential assets and was little known in the capital markets. But after de Vargas joined, it was soon on a tear. Its portfolio value rose to 2.4 billion euros by 2017, funded largely by local lenders. To get even bigger, Adler needed access to the kind of bond financing only a major-league investment bank can arrange.

To woo marquee lenders, de Vargas would sometimes use a yacht owned by a group of fellow boat enthusiasts to host dozens of bankers, lawyers and auditors, according to a person familiar with the matter. Paid for in part by Adler, the bonding exercises lasted several days and involved drinks and an evening buffet, though guests wouldn’t necessarily stay for the entire duration. Caner would on occasion show up, the person said.

It was through de Vargas that Adler’s relationship with JPMorgan bankers Guillermo Baygual and Ashish Agrawal was established, according to a letter sent by a self-described whistle-blower to JPMorgan last year and seen by Bloomberg News. The letter alleges that the pair were Adler’s main relationship bankers at JPMorgan and that they were aware of Caner’s alleged influence over the company but “helped conceal” it. On at least one occasion they attended one of the get togethers the company organized on the yachts, according to people familiar with the matter.

Caner’s lawyer said his client never met the pair and that they didn’t help conceal his role. JPMorgan conducted an investigation into the whistle-blower memo last year, and Baygual — a former co-head of real estate — and Agrawal — an M&A banker, according to his LinkedIn profile — continue to work there, a bank spokesman says. The two didn’t respond to requests for comment.

As Adler’s hunger for deals and capital spending fueled a constant need for cash, it became a chunky fee generator for the likes of Barclays, Deutsche Bank and above all JPMorgan. Over the past few years, Adler paid some of the highest fees in German real estate, with JPMorgan pocketing more than half of them since 2019, according to a person familiar with the matter.

The lenders that helped Adler sell 8 billion euros of bonds may have generated about 1.5% of fees per deal on average, according to some of the debt prospectuses, above the typical 0.75%-1% for these types of transactions. JPMorgan sold a 500 million-euro Adler bond as recently as April 2021, a month after the whistle-blower first emailed the bank.

Fees on bridge loans, which put temporary financing in place for acquisitions before syndicating it to investors, were lucrative too. JPMorgan was paid about 13 million euros for providing a 3.5 billion-euro bridge loan to ADO Properties in December 2019 to finance the three-way merger between Adler Real Estate, ADO and Consus Real Estate that created Adler Group, according to a person familiar with the deal who wanted to remain anonymous discussing private matters. The fees were several million euros above what property companies with similar credit ratings would have expected to pay for such a deal, bankers who know the industry say. JPMorgan had already provided a bridge loan for Adler’s 2018 purchase of Brack, another property firm.

The Wall Street lender was also the book-running bank on a 400 million-euro bond sale for Consus in May 2019, ahead of the three-way merger. KepCap, Morgan Stanley and Oddo were co-managers. The debt priced at a more than 10% yield, way above what would have been expected from Consus’s B-/B credit rating, as investors struggled to get comfortable with its risk profile.

One arranging bank on that sale likely ended up acquiring some of the bonds, according to a Caner email published by KPMG — often a sign that it’s been hard to find buyers. “To be clear: no one apart from this small group can know that bank X took a position on the bonds,” Caner wrote in May 2019, adding that the info should be kept “super tight even inside your organizations.”

The investors who steered clear of Adler affiliates have been vindicated over time. Adler Real Estate’s bondholders are now having to worry about its liquidity, and whether it can repay its debt, after it bought a portfolio of Berlin flats from the parent group for 326 million euros. Consus’s value, meanwhile, has been written down to near zero.

At least one investment banker has started working for a Caner-connected company recently. Siddhant Jain, a European real-estate specialist, left JPMorgan in June 2021 to join Aggregate Holdings SA, a key Adler shareholder that was advised by Caner, and where the tycoon has just become a stakeholder and CEO. KPMG’s report noted that Jain was involved in the 2019-2020 deal that led to Adler Group’s creation.

Most of Adler’s former banker associates, however, have been scrambling to distance themselves from the company as the market speculates about the real values of its portfolios and its ability to honor its debts. The 3.5 billion-euro bridge loan underwritten by JPMorgan was syndicated to investors, leaving no exposure. And a 300 million-euro line of credit from Barclays, Deutsche Bank and JPMorgan has been terminated.

Adler drew down on that credit late last year as its financial woes deepened in the wake of Viceroy Research’s short-selling attack. Soon after that, the banks hired consultancy firm FTI to advise them on whether the real-estate group would have the wherewithal to pay back the loan. They asked Adler to provide key pieces of documentation to assess its liquidity, but the firm said it would repay the money rather than hand over the paperwork, according to people familiar with the private discussions.

Some banks have gone further than simply de-risking their Adler positions, and have also offered novel ways to trade on the property giant’s troubles. Goldman Sachs and JPMorgan have been pitching wagers this year on how much money investors will retrieve if it defaults.