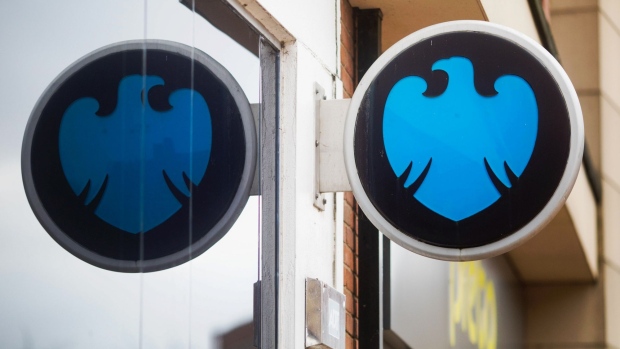 A sign outside a Barclays Plc bank branch in Chelmsford, U.K., on Thursday, Feb. 11, 2021. The U.K. economy grew at double the pace expected in the fourth quarter, showing signs of resilience to coronavirus restrictions at the end of a year that delivered the worst recession since 1709. Photographer: Chris Ratcliffe/Bloomberg , Bloomberg

Barclays Plc shares briefly dropped almost 10 per cent in the opening minutes of Wednesday’s session, the most intraday in more than a year, in what traders said was likely due to an error known as a “fat finger.”

The stock entered a volatility auction at about 8:06 a.m. in London after two trades totaling about 48,000 shares at a price of 168.40 pence, according to Bloomberg data. The shares quickly recovered after the five-minute pause and were down 0.3 per cent to 186.32 pence at midday. 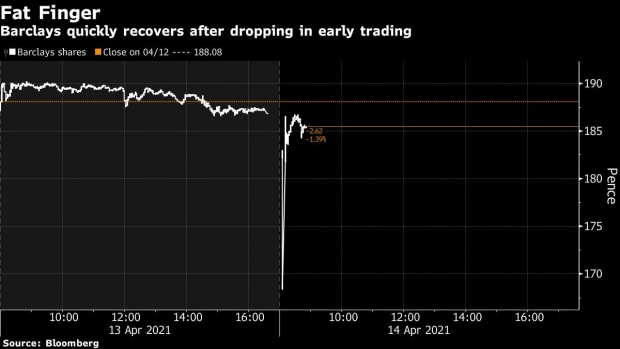 Trades made in human error, or even by algorithms, are often referred to as “fat fingers,” a term stemming from the idea that a person’s over-sized digits might cause them to hit the wrong button on a computer keyboard. While generally not uncommon, fat fingers in high-profile stocks like Barclays -- one of the U.K.’s largest publicly traded companies -- are rare.

About two years ago, a fat finger was cited for an 83 per cent drop in shares of investment firm Jardine Matheson Holdings Ltd. in Singapore, while in 2018, BNP Paribas Securities was blamed for erroneous orders that knocked almost 10 per cent off the value of Taiwan-listed Formosa Petrochemical Corp.

While erroneous trades are sometimes canceled, there were no cancelations for Barclays as of midday, Bloomberg data show. The day’s low, according to the data, matched that shown on the London Stock Exchange website.