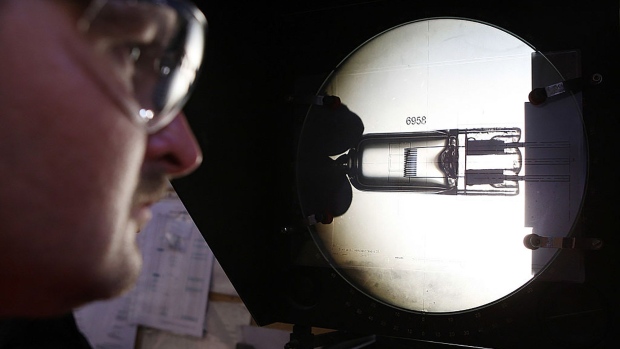 The father of modern supply chains is watching the biggest test of his invention with a sense of pride, some regret, and concern that drastic efforts to realign them will ultimately hurt consumers.

Keith Oliver still recalls the moment in 1978 when a light bulb went off while he was a Booz Allen Hamilton consultant working for a unit of Philips NV, the Dutch electronics giant trying to compete globally back when Japan was the rising economic power in Asia that worried western companies.

Components in a Philips television, he discovered, traveled an average of 30,000 miles, hopscotching the globe from one step of production to the next before arriving in an American or European living room.

U.K.-born Oliver, then in his mid-30s, pitched a solution initially billed as “integrated inventory management.” Eyes in the Philips boardroom quickly glazed over. So when he ad-libbed, describing a “chain of supply” to unify a fragmented organization, a new theory of how to run a multinational company had a brand -- and a science of managing global manufacturing was born.

Jump ahead to the 2020 pandemic, and supply chains have gone from back-office obscurity to political scapegoat because they expose economies to shocks beyond their borders. In an interview last week, Oliver said he sees plenty of room for improvement, but he bristles at many governments’ plans to nationalize his brainchild.

“This strikes me as a short-term victory for the political at the expense of the overall economic, intellectual and global social progress,” says Oliver, now retired in Vancouver after a more than 40 years with Booz Allen. “Yeah, it’ll make it easier because the supply chain won’t be as long, there’s no doubt about that. The costs will go up, without any doubt whatsoever. So prices will go up and we’ll hammer the consumer.”

Such trade-offs are the subject of much C-suite rethinking of late, and rare was the second-quarter earnings call where the chief executive officer of a major international producer didn’t address them.

Tom Linebarger, chairman and CEO of engine maker Cummins Inc., said “our supply-chain organization faced some of the most significant demand fluctuations in the company’s history.”

David Calhoun, Boeing Co.’s president and CEO, said the plane maker is “doing everything we can to support our global suppliers and their stability remains a key watch item for us in the aerospace -- as our aerospace industry weathers these unprecedented challenges.” Part of that effort means assessing risks and “continuing payments to our more than 12,000 suppliers supporting about 1.5 million jobs,” he said.

James Hagedorn, chairman and CEO of Scotts Miracle-Gro Co., praised the response by the maker of lawn-and-garden products but added a caveat. “We often employed a bend-but-don’t-break mentality as our teams worked 24/7 to keep up with record demand,” he said. “At times, service levels fell below our standard. We own that issue and we’re working to fix it.”

Humility is the right attitude, according to Oliver, who says the mistakes induced by the pandemic are mostly pilot error.

“The shortfalls demonstrated in supply chains with the recent events are primarily management failures,” he says. “We do actually have the philosophies, concepts, tools and technologies to manage global extended-enterprise supply chains -- the failure is in their rigorous application.”

It wasn’t until 1982 that Oliver’s concept appeared publicly -- in an article in the Financial Times, which called it “rather grandly titled ‘supply-chain management.’” U.S. and European companies were woefully behind their Japanese competitors on things like inventory control and built large, costly stockpiles as buffers against demand uncertainties.

The idea Oliver was espousing involved directing everything along the production process as a single entity rather than a group of disparate functions. But it needed to evolve with changing market circumstances or it would become structurally misaligned.

Over the following two decades, Oliver says a few broad changes happened that tested the durability of supply chains. The first was a rise in consumer preferences for customization -- an iPhone in red, gold, black, white or silver; variety is an enemy because it makes demand hard to forecast. The second variable was globalization and companies stretching out across the world to reduce costs -- ushering an era of low global inflation and low interest rates.

“Remember that the whole reason to go out there was in fact the reduction of cost,” Oliver says. “In the majority of instances, it actually produced a very significant cost reduction.”

There was a societal toll, though, according to officials like U.S. Trade Representative Robert Lighthizer, the architect of President Donald Trump’s tariff offensive against China. In an essay in a recent edition of Foreign Affairs magazine, he derided those who’ve been “obsessed with efficiency” and called supply-chain relocation “a cure-all peddled by management consulting firms.”

Around 2000, Oliver said, he and others realized the three main types of risk -- two of which are currently wreaking havoc -- needed more attention: internal risks like workers going on strike; external risk such as a trade war that boosts tariffs; and acts of nature like a pandemic that paralyzes the global economy.

“Many companies caught up in the outsourcing frenzy failed to appreciate the risks,” Lighthizer wrote, a statement with which Oliver might partially agree.

“The problem is in how people have dealt with the concept of risk,” said Oliver, who retired in 2008. “The very least you ought to have done is to ask yourself some ‘what-if’ questions, so when a disaster happens, it isn’t like ‘Oh shoot, what am I going to do?’ It’s a question of which of my pre-selected solutions should I check into at this point in time, and nobody had a pre-selected solution.”

Another shortcoming in Oliver’s view was a belief among top executives that technology, automation and artificial intelligence would smooth disruptions on their own.

“Turning everything over to a black box is a very dangerous thing to happen in a supply chain,” said Timothy Laseter, who worked with Oliver at Booz Allen and is now a professor at the University of Virginia’s Darden School of Business. “Progress will continue, but will it ever be as theoretically pure as we want it to be? Probably not.”

Oliver shares the skepticism, but he remains optimistic that the recent shocks are surmountable and might even be a catalyst for making supply chains a bigger part of a company’s strategic plan. “The progress has been huge,” he said. “I am frustrated that the potential has not been realized.”