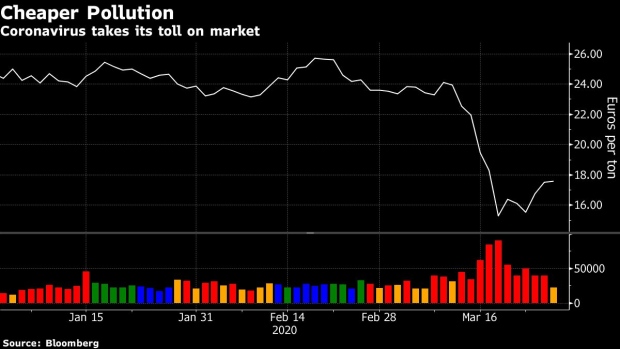 (Bloomberg) -- Two of the architects of the European Union’s pollution cap-and-trade system said policymakers shouldn’t rush to intervene in the market after prices dropped by almost a third.

Thousands of industrial energy users and airlines buy the allowances to cover their greenhouse gas emissions. Since the start of the month, prices of those allowances has tumbled about a third, reducing the economic pressure on companies to rein in fossil-fuel use.

That drop is probably temporary and relieves pressure on companies troubled by the economic slowdown, according to Jos Delbeke and Peter Vis, who are both former senior officials in the European Commission. They played a key role in launching the EU cap-and-trade system 15 years ago.

Lower carbon prices gently reduce economic pressures on polluters to rein in their emissions. It also would weaken the Green Deal that EC President Ursula von der Leyen is proposing to overhaul the economy in step with the Paris Agreement on climate change.

Benchmark European emissions permits were trading near 17 euros a ton on Thursday. Delbeke said that he didn’t expect them to fall to as low as 10 euros, which is a concern of some investors.

The EU Emissions Trading System imposes declining pollution caps on thousands of manufacturers and utilities, enabling those who emit less to sell their allowances to those who discharge more carbon dioxide.

“Fluctuations are normal for a market-based system, and we may see fluctuations between 10 euros and 25 euros in the weeks to come, where we will see more upheaval on the economic front,” said Delbeke, now a professor at the European University Institute in Florence. He was speaking in a videoconference on the ETS hosted by Rud Pedersen Public Affairs.

The ETS is the region’s flagship climate policy tool, aiming to reduce emissions in the most cost-effective way. Allowances trade based on complex patterns of supply and demand, fixed by distribution of permits that the EU allows member governments to sell and give for free to companies.

Before a series of reforms that curbed an oversupply of permits, prices in the system languished at an average of about 9 euros for almost a decade. The last overhaul, which became a law in 2018, introduced automatic supply controls via a mechanism called the Market Stability Reserve, which now soaks up excess allowances.

“I have strong confidence that the Market Stability Reserve as it’s designed, is going to do the trick,” Delbeke said. Any revision of the MSR and its parameters would require a legislative process involving national governments and the European Parliament that could last two years.

Before the coronavirus pandemic, emission prices were also supported by expectations that the EU’s far-reaching Green Deal will further tighten the carbon market.

The strategy aims to make Europe the world’s first climate-neutral continent by 2050 and envisages stricter emission-reduction targets for 2030. The current goal is to cut greenhouse gases by 40% from 1990 levels and the commission is currently revising it.

“We’re heading toward a new amendment on the ETS and if it reflects a higher level of ambition, toward 55%, conceivably some degree of increased stringency will have to be incorporated within the ETS,” said Vis, currently senior adviser at Rud Pedersen Public Affairs in Brussels. “And that knowledge alone ought to prevent the price from falling too far.”