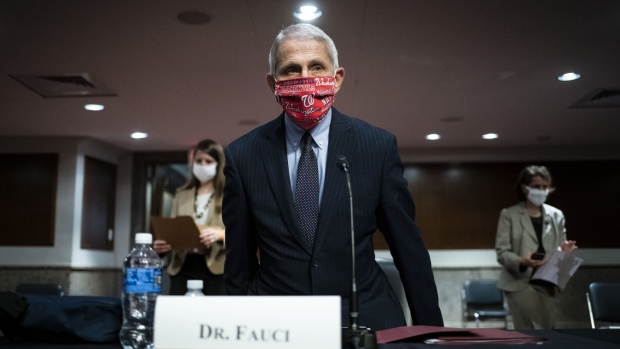 (Bloomberg) -- Infectious-disease expert Anthony Fauci told a Senate panel he’s “aspirationally hopeful” that a vaccine for Covid-19 will be ready in early 2021, while the Food and Drug Administration laid out standards for approving an inoculation.

The FDA said that any candidate would have to be at least 50% more effective than a placebo. Several drugmakers are racing to complete clinical trials of vaccine candidates, with some expecting to wrap up in months studies that under previous circumstances have tended to take years.

Some health experts have expressed worry that FDA will rush to approve a vaccine before enough is known about safety or efficacy but the agency sought to allay those fears with the guidance.

Fauci, the director of the National Institute of Allergy and Infectious Diseases, cautioned though that there is no guarantee that a safe vaccine will be developed. He also told the Senate health committee on Tuesday that he’s “quite concerned” by the recent increase in cases in southern and western states.

Several states are experiencing surges in new coronavirus cases, prompting many to roll back reopening plans. On Monday, Arizona paused operations at bars, gyms and movie theaters. Texas has delayed moving into new reopening phases as the state becomes the new epicenter of the pandemic. New York leaders are considering pushing back plans to allow indoor dining as they watch the rest of the country warily.

Robert Redfield, director of the Centers for Disease Control and Prevention, noted that in addition to the rise in new cases, hospitalizations are up in 12 states. The U.S. has recorded nearly 2.7 million Covid-19 cases in total, with almost 130,000 deaths from the virus.

Redfield and Fauci appeared before the committee for a hearing on reopening U.S. businesses and returning students to school. Fauci said schools may need to consider online classes or staggered schedules to safely bring students back. The CDC will issue guidance for schools on Tuesday.

As for airlines, while the CDC hasn’t focused on their plans, American Airlines Group Inc.’s announcement on Friday that it would resume selling flights to capacity on July 1 rather than capping passengers to keep them socially distanced caused “substantial disappointment” among public health officials, Redfield said.

Senator Lamar Alexander of Tennessee, chairman of the committee, opened the hearing with comments on wearing masks, saying the issue shouldn’t be as politicized as it’s become and that he’s asked President Donald Trump to wear a mask to set an example. Vice President Mike Pence appeared in Texas over the weekend in a mask and spoke about the value of covering your face in protecting against the virus.

Fauci told the panel, “I think we need to emphasize the responsibility we have as individuals and as part of a societal effort to end the epidemic and we all have to play a part in that.”

Federal Reserve Chairman Jerome Powell is appearing before House lawmakers Tuesday. He plans to testify that the U.S. is at a crucial point in a potential economic recovery and must contain the virus.

“The path forward for the economy is extraordinarily uncertain and will depend in large part on our success in containing the virus,” Powell said in prepared testimony.

(Updates with additional comments from officials and more context)