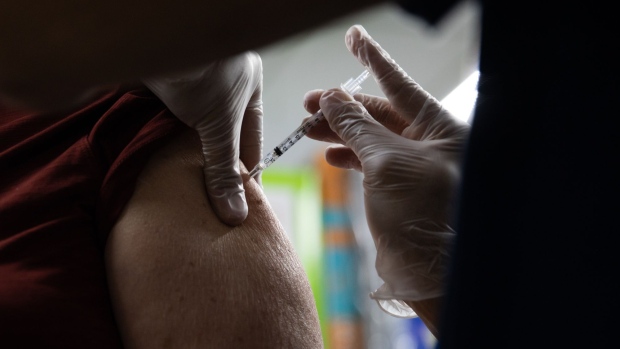 A shot developed by China’s Sichuan Clover Biopharmaceuticals Inc. was found to be 79% effective against the delta variant. Anthony Fauci said he expects mRNA vaccines to be administered as a three-dose regimen.

U.S. President Joe Biden called on other nations to help vastly expand production of shots and treatments in order to end the pandemic. He said the U.S. will buy an additional 500 million doses of Pfizer Inc.’s vaccine for donation abroad.

Pregnant women who get mRNA jabs pass high levels of antibodies to their babies, according to a study published in American Journal of Obstetrics & Gynecology – Maternal Fetal Medicine on Wednesday.

The United Nations said a delegate who was in the main hall of the General Assembly on Tuesday morning tested positive for Covid-19. While the UN didn’t identify which country the delegate represented, heads of state speaking in the hall at that time included Joe Biden of the U.S. and Brazil’s Jair Bolsonaro.

Two members of Bolsonaro’s delegation -- including Brazil’s health minister -- have tested positive for Covid-19 while in New York.

UN staff who might have been in contact with the infected person “will be notified individually and guided through next steps,” spokesman Stephane Dujarric said in a statement. New York officials had called on the UN to enforce stricter requirements on visiting delegates, but the organization hasn’t required proof of vaccination to enter its buildings.

New York City’s requirement for teachers to be vaccinated was cleared by a state judge following a legal challenge from labor unions.

New York State Supreme Court Justice Laurence L. Love vacated a temporary restraining order that had stopped the vaccine mandate from being enforced while the case is being litigated.

Future administration of mRNA vaccines like Pfizer-BioNTech SE and Moderna Inc.’s will likely require three doses from the start, instead of two doses plus a booster, Anthony Fauci said.

If implemented as the top infectious disease expert predicted, the third shot would become part of the primary series, potentially changing the vaccine label and plan for administering shots altogether.

The top leadership of the Church of Jesus Christ of Latter-day Saints on Wednesday ordered mandatory use of face masks in its temples around the globe and again called for members to get vaccinated, citing the Mormon church’s history in prior pandemics.

President Joe Biden called on other nations to help vastly expand production of coronavirus vaccines and treatments in order to end the Covid-19 pandemic in a virtual summit he hosted Wednesday.

The summit’s attendees include the leaders of the U.K., Canada, South Africa and Indonesia, private-sector figures and representatives of non-governmental organizations. Biden led one of four sessions, on vaccinating the world, while Vice President Kamala Harris will lead another.

MTA to Step Up Enforcement of Subway Masks (1 p.m. NY)

The New York Metropolitan Transportation Authority said it will increase enforcement of its mask-wearing policy as new data show compliance is waning on subway, buses and commuter trains, WABC-TV reported.

Compliance was nearly universal in the early days of the pandemic but has fallen to about 87% on the city’s subways, MTA Chief Safety Officer Pat Warren said, according to the television station.

Riders will get one warning from MTA Police to wear a mask, and if they don’t, they will get a summons, Warren said.

Pregnant women who get mRNA vaccines pass high levels of antibodies to their babies, according to a study published in American Journal of Obstetrics & Gynecology – Maternal Fetal Medicine on Wednesday.

The study -- one of the first to measure antibody levels in umbilical cord blood to distinguish whether immunity is from infection or vaccines -- found that 36 newborns tested at birth all had antibodies to protect against Covid-19 after their mothers were vaccinated with shots from Pfizer Inc.-BioNTech SE or Moderna Inc.

Romania approved booster shots from Pfizer Inc. and Moderna Inc. for those who were fully vaccinated at least six months earlier, Prime Minister Florin Citu said on Wednesday. Shots will begin on Sept. 28.

The eastern European nation, one of the least vaccinated states in the EU, recently had more than 700,000 doses expire, even though it’s in the midst of the biggest wave of cases and hospitalizations since December.

A vaccine developed by Sichuan Clover Biopharmaceuticals Inc. was found to prevent 79% of cases of any severity caused by the delta variant in late-stage trials, making it the first Chinese shot to offer clear efficacy data against the strain causing resurgent waves of infections around the world.

Early treatment with Gilead Sciences Inc.’s remdesivir kept high-risk patients out of the hospital in a late-stage international trial that supports administering the medicine to individuals recovering at home.

A three-day course of the injectable antiviral, also known as Veklury, was associated with an 87% reduction in hospitalizations in a randomized, placebo-controlled trial involving 562 patients, Gilead said Wednesday. The data are slated for release at a virtual medical meeting on Sept. 29.

Malaysia will resume interstate travel to help revive domestic tourism once 90% of the adult population is fully vaccinated, Prime Minister Ismail Sabri Yaakob said in a statement on Wednesday. The announcement comes a day after the country met its target of fully inoculating 80% of adults.

Singapore will curb hospital ward visits for a month, among several measures put in place in order to preserve hospital capacity as cases rise, the Ministry of Health said in a statement.