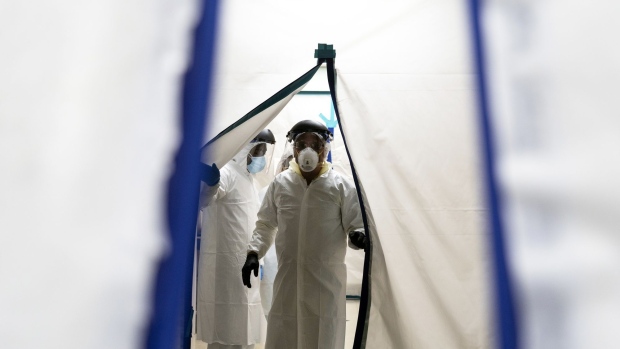 A doctor wearing protective gear goes through an air tight curtain while entering the Covid-19 intensive care unit (ICU) at the United Memorial Medical Center (UMMC) in Houston, Texas, U.S., on Monday, June 29, 2020. Covid-19 cases and hospitalizations have spiked since Texas reopened eight weeks ago, pushing intensive-care wards to full capacity and sparking concerns about a surge in fatalities as the contagion spreads. , Bloomberg

The European Union extended a travel ban for Americans, deeming the U.S. response to the outbreak insufficient. Prime Minister Boris Johnson committed to spend billions of pounds on infrastructure to rebuild the U.K. economy.

A strain of flu virus spreading in Chinese pigs has shown it can also infect humans, suggesting that another pathogen with pandemic potential waits in the wings behind Covid-19, according to a team of researchers. Hong Kong will extend the public gathering limit of 50 people for another two weeks.

Iran will reintroduce lockdown measures on one of its busiest port cities on the Persian Gulf following a surge in cases.

Bandar Abbas, the capital of Hormuzgan province and a major trade hub on the Strait of Hormuz, is one of seven cities that will be closed for one week from Friday, Fereydoun Hemmati, the provincial governor told reporters, the semi-official Iranian Students’ News Agency reported.

The islands of Kish and Qeshm, which are major tourist attractions, will also face the measures, Hemmati said, adding that the lockdown will involve the closure of all schools, universities, most offices, cinemas, coffee shops, restaurants, public pools, gyms and parks.

The Trump administration’s coronavirus task force stepped up its calls for Americans to wear masks, but Vice President Mike Pence said there were no plans to override governors who have yet to require them.

“Please, please, please wear a face covering when you go out in public,” Surgeon General Jerome Adams, a member of the task force, said at a White House briefing Tuesday.

Adams delivered the strongest plea to the public yet from an administration that has often sidestepped direct recommendations to wear masks. Health Secretary Alex Azar and Pence both urged wearing a mask at the same event Tuesday in Rockville, Maryland, though Pence only said to do so if local authorities recommended it.

President Donald Trump has mocked his Democratic challenger Joe Biden for wearing a mask and has never publicly worn one, though he is facing calls to do so.

“With neighboring states now closing bars, we don’t want Colorado to become a mecca of night life in the pandemic,” Polis said at a news conference in Denver.

The U.S. minor league baseball season was canceled for the first time in its history, which dates back to 1901.

“While this is a sad day for many, this announcement removes the uncertainty surrounding the 2020 season and allows our teams to begin planning for an exciting 2021 season of affordable family entertainment,” Minor League Baseball President Pat O’Conner said in a statement.

Texas posted its worst day yet for new cases, with 6,975 positive tests that pushed to total to 159,986, according to state health department figures. The 4.6% increase exceeded the seven-day average of 4.2%. Hospitalizations also increased by a record, with 620 new admissions, amid increasing warnings that the state’s medical infrastructure is under strain.

Caseload and fatality trends, however, continue to move in opposite directions. The Lone Star state recorded 21 Covid-19 deaths in the past 24 hours, the fifth straight day the death toll has expanded by less than 2%, state data showed. Fatalities peaked at 58 on May 14 and have only topped 50 on one day in the intervening seven weeks.

New York state health officials are investigating a potential coronavirus pocket stemming from a church service in a small upstate community. The state health department is tracing the contacts of an individual who tested positive for Covid-19 and attended a June 21 religious service at St. Mary’s Catholic Church in Ticonderoga, Governor Andrew Cuomo said Tuesday.

The individual contracted the virus in Florida and is now self-isolating, Cuomo said, adding that there have been “no additional known exposures” related to the service. The state is providing testing for anyone who attended the service.

Cuomo also announced that the Capital Region is cleared to begin phase 4 of reopening starting Wednesday. This includes low-risk outdoor and indoor arts and entertainment, media production and in-person higher education services at colleges and universities that have submitted their reopening plans to the state.

Coronavirus cases in the U.S. increased by 48,096 to 2.61 million as compared with the same time yesterday, according to data collected by Johns Hopkins University and Bloomberg News. The 1.9% gain was above the average daily increase of 1.6% over the past week. Deaths rose 0.5% to 126,512.

Florida will start reporting current Covid-19 hospitalizations for the first time in the next few days, potentially adding an important new data set at a time when the state is facing a dramatic resurgence of the virus.

In an emailed response to questions, Florida Department of Health spokesman Alberto Moscoso said the information will be published alongside other publicly-available data on cases.

Florida has been criticized for not publishing the data sooner. Its daily reports include a cumulative total of Covid-19 related hospitalizations, but not the number of coronavirus patients admitted currently in the state’s health-care system.

Joe Biden assailed Donald Trump’s handling of the coronavirus pandemic on Tuesday, arguing the president has failed to protect Americans and exacerbated a crisis that other countries have managed to control.

Biden, the Democratic nominee, laid out his plan to fight the virus and safely reopen the economy, and he urged Trump to adopt his proposals. The moment, he said, required the president to lead and move beyond politics.

“Mr. President -- the crisis is real -- and it’s surging,” Biden said. “Promises and predictions and wishful thinking pulled out of thin air are not only doing this country no good, it’s making them lose more faith in their government.”

Florida’s Miami-Dade County, the state’s most populous, reported the highest numbers of Covid-19 hospitalizations, intensive-care patients and ventilator use since at least early May.

The county said Tuesday that it has 1,202 people with Covid-19 in hospitals, an increase of 53 from a day earlier. The number of virus patients in intensive-care unit beds rose to 245 from 236, according to a report. There are 103 Covid-19 patients on ventilators, up from 90 a day earlier.

Travelers arriving in Puerto Rico will be required to show a negative Covid-19 test or submit to a two-week quarantine as the bankrupt U.S. commonwealth tries to kickstart its tourism economy without triggering a surge in coronavirus cases.

Under the executive order announced Tuesday, people flying into Luis Munoz Marin International Airport starting July 15 will be required to show a negative molecular, or Pcr, test that has been taken in the past 72 hours.

A government-granted special exemption will allow Netflix’s “Terra Vision” series to start shooting in July while Legendary’s “Dune,” Amazon’s “The Banker’s Wife,” Sony’s “The Nightingale” and Showtime’s “Halo” will be allowed to resume work, according to Variety. A spokesperson at the National Film Institute confirmed the report.

The Houston region’s intensive-care units reached 97% of normal capacity, up from 95% 24 hours earlier, according to the Texas Medical Center. Covid-19 patients occupied 460 ICU beds as of Monday night, a 3.4% increase from Sunday, and virus victims accounted for 35% of all intensive-care cases.

Given the rate of spread, Houston hospitals are on pace to swamp normal ICU capacity by Thursday night, which would force doctors to begin using so-called surge capacity, according to the medical center.

Chicago has awarded a $56 million grant to the Chicago Cook Workforce Partnership for contact tracing in the city, and 85% of the funding will go to community organizations in areas of high economic hardship, according to an announcement from Mayor Lori Lightfoot.

About 600 contact tracers will be hired for $20 per hour directly from the communities adversely affected by Covid-19, Lightfoot said in a statement.

The program will bolster efforts to curb the disease while creating new jobs and offering training for careers in public health and patient care, she said.

Arizona health authorities reported 4,682 new cases Tuesday, a 6.3% increase, bringing the total number of cases to 79,215. The increase covers a two-day period after the state announced that a reporting issue meant all new cases weren’t counted on Monday.

The state reported 625 new cases Monday, fewer than half of actual cases, according to the Arizona Department of Health Services. The state also reported 44 new deaths Tuesday, marking a total of 1,632.

The Food and Drug Administration issued guidance on how it would assess vaccine candidates, saying it would only allow ones that are at least 50% more effective than a placebo.

“The American people should know that we have not lost sight of our responsibility to maintain our regulatory independence and ensure that our decisions related to all medical products, including those related to Covid-19 vaccines, are based on sound science and the available data,” FDA Commissioner Stephen Hahn told the Senate health committee on Tuesday.

Infectious-disease expert Anthony Fauci also told the panel that he’s “aspirationally hopeful” that a vaccine for Covid-19 will be ready in early 2021.

New York Governor Andrew Cuomo announced that travelers from eight additional states, including California, will be required to quarantine for 14 days when traveling to New York.