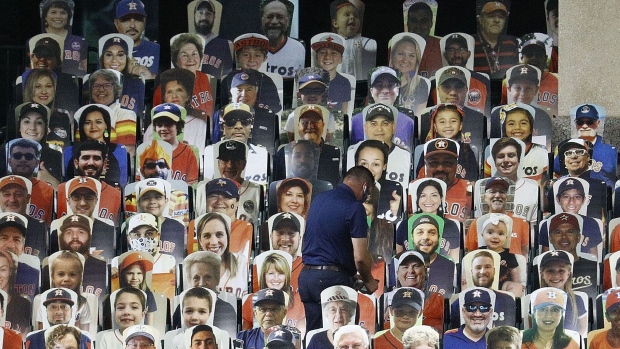 The nation’s top infectious disease expert says the Major League Baseball season may be in danger after 12 Miami Marlins players and two coaches tested positive for COVID-19 -- and that the outbreak doesn’t bode well for the start of professional football.

“I don’t believe they need to stop but we just need to follow this and see what happens with other teams on a day-by-day basis,” Anthony Fauci, director of the National Institute of Allergies and Infectious Diseases, said in an interview Tuesday with ABC.

Fauci, who last week threw out the first pitch on opening day for the Washington Nationals, commented after the newly started Major League Baseball season saw it’s first game cancellations due to the virus.

The Marlins canceled the team’s home opener, according to ESPN, and the Philadelphia Phillies -- who played the Marlins this past weekend -- postponed their Monday game against New York Yankees.

“You just have to watch this, it could put it in danger,” Fauci said of the MLB season.

Asked if the National Football League will have to operate in a “bubble,” similar to the precautions undertaken by the National Basketball Association, Fauci said that’s possible.

The basketball league has planned to play the rest of its season by moving most of its teams to a facility at Disney World in Florida and playing without fans. That season restarts Thursday.

“It might be that they have to go in a bubble,” Fauci said. “I think they’re conscientious enough and want to protect their players and protect their personnel that they will do the right thing.”