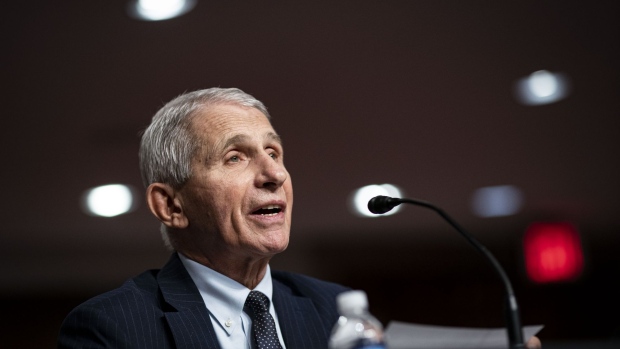 Anthony Fauci, director of the National Institute of Allergy and Infectious Diseases, speaks during a Senate Health, Education, Labor, and Pensions Committee hearing in Washington, D.C., U.S., on Thursday, Nov. 4, 2021. Younger children across the U.S. are now eligible to receive Pfizer's Covid-19 vaccine, after the head of the Centers for Disease Control and Prevention this week granted the final clearance needed for shots to begin. , Bloomberg

(Bloomberg) -- The Biden administration’s restrictions on travel from southern Africa because of the omicron coronavirus variant will be temporary, Anthony Fauci said Wednesday after health officials identified the first U.S. case of the mutated virus.

The travel ban won’t prevent infected people from arriving “but we needed to buy some time to be able to prepare,” Fauci, the director of the National Institute of Allergy and Infectious Diseases, said Wednesday at the White House. He’s also President Joe Biden’s chief medical adviser.

“We look at this as a temporary measure,” he said.

Biden has said omicron is concerning but has urged against panic. Fauci said a day earlier that it was too soon to say how transmissible, harmful and vaccine-resistant the variant will be.

“We’re really very early in the process,” he said Wednesday in a briefing for reporters.

In the meantime, Biden and Fauci have urged vaccinations as a way to bolster protection against both the delta and omicron variants. The Centers for Disease Control and Prevention announced moments before Fauci began speaking on Wednesday that the first U.S. case of omicron had been identified in California. The infected person was a traveler who returned from South Africa on Nov. 22.

“We knew it was just a matter of time,” Fauci said.

Biden plans to outline his strategy to fight a winter surge of Covid in a speech on Thursday. That will include measures aimed at slowing the spread of omicron, including narrowing the testing window for people boarding U.S.-bound flights to one day.

Omicron has a larger number of mutations, around 50, than any other variant, including more than 30 on the spike protein, Fauci said during a Tuesday press briefing. The mutations have been associated with increased transmissibility and immune evasion, he said, while other effects are unknown.

While it’s possible it’s more transmissible than delta, that isn’t yet clear, he said Tuesday, but vaccines should give “at least some degree of cross-protection, particularly against severe disease.”

Soumya Swaminathan, the chief scientist for the World Health Organization, said Wednesday that vaccines are likely to protect against severe omicron cases. The WHO expects more data on omicron transmission within days.