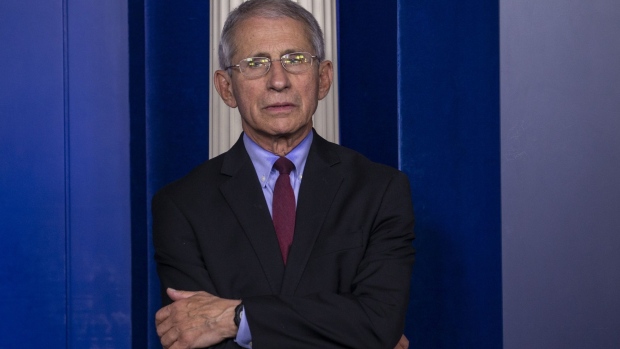 Anthony Fauci, director of the National Institute of Allergy and Infectious Diseases, listens during a Coronavirus Task Force news conference at the White House in Washington, D.C., U.S., on Saturday, April 4, 2020. President Donald Trump said he would use the Defense Production Act to retaliate in cases where companies ship medical equipment elsewhere that’s needed in the U.S. to cope with the coronavirus pandemic. , Bloomberg

Top U.S. health officials said they haven’t been asked to slow down coronavirus testing and indicated they plan to ramp up screening for COVID-19 as infections surge in some of the most populous states.

President Donald Trump has said he asked for testing to be cut back. But Anthony Fauci, the National Institute of Allergy and Infectious Diseases Director, and Robert Redfield, the Centers for Disease Control and Prevention Director, both said they’ve not been told to curtail screening efforts.

“It’s the opposite,” Fauci said at a hearing of the House Energy and Commerce Committee on Tuesday. “We’re going to be doing more testing, not less.” He noted a “disturbing surge” of infections in reopening states, and said “the next couple of weeks are going to be critical in our ability to address those surges we’re seeing in Florida and Texas and Arizona.”

At the same time, he said he was “cautiously optimistic” that a COVID-19 vaccine will be ready by the end of the year.

The hearing comes as the U.S. has recorded 2.3 million cases and more than 120,000 deaths, with rates of infection increasing across states in the South and West that were among the first to reopen. Texas Governor Greg Abbott, a Republican, said Monday cases there were increasing at “an unacceptable rate.” The state hit a high on Saturday with 4,430 new cases.

Frank Pallone, the Democratic chairman of the Energy and Commerce Committee, opened the session by urging the health officials to take “more of a leadership role” in the national battle to stem the disease’s advance.

Pallone focused in on the Trump rally in Tulsa, when the president said he has asked for testing to be slowed down, saying it was “extremely reckless, and unfortunately it continues the pattern of the president ignoring his public health experts.”

Fauci said in his opening statement that at least one vaccine is set to go into a Phase 3 testing by July, and others would quickly follow. His agency is preparing to begin large clinical trials of a vaccine that it’s co-developing with U.S.-based biotechnology company Moderna Inc. next month. The effort is part of Trump’s Warp Speed plan to get doses to the country this year.

In other comments during the hearing, Fauci referred to the current number of virus cases in the U.S. as “a mixed bag, really. We have a very large country, very heterogeneous,” he said. “If you look at how we’ve been hit, we’ve been hit badly.”

Representative Pete Olson, a Republican from Texas, called the situation in his state scary, and asked Fauci for his insight on people who aren’t taking the virus seriously.

“You have a situation that is very confusing,” Fauci said, noting some young people are infected but don’t show symptoms or only experience mild symptoms. But he said people have a dual responsibility, not just for themselves but also for others who are more vulnerable that they may spread the virus to

Those who spread the virus even it they don’t get sick are “part of the process of the dynamics of an outbreak,” Fauci said.

Asked by Representative Brett Guthrie of Kentucky whether children will be able to go back to school in August, Fauci and Redfield both said those decisions will be made by local officials. Redfield said the CDC will soon issue guidance on school reopening.

“You don’t want to make one-size-fits-all for the United States,” Fauci said.

The NIAID director also said there would be no shortcuts on determining safety of effectiveness of a vaccine, but that companies are taking a “risk to money” by starting manufacturing before knowing what will work.

“We will rely upon the science and data when it’s available to us,” said Food and Drug Administration Commissioner Stephen Hahn, who also testified at the hearing along with Assistant Health Secretary Brett Giroir.

Joint prepared testimony from the officials said they anticipate coronavirus activity “to continue for some time” and warned that if the virus is still spreading once the annual flu season hits in the fall, it could be a “tremendous burden” on an already stretched health system.

In an interview earlier this week, Fauci said the virus does not appear to be taking a summer break despite comments he made earlier in the year that lung infections tend to slow down in warmer months, a sentiment that has been echoed by President Donald Trump.

At the hearing, he called COVID-19 a “double whammy” for the Black community because of underlying health conditions. “the African American community has suffered from racism for a very long period of time and I cannot imagine that that has not contributed to the situation they find themselves in.”

Giroir, meanwhile, announced during the meeting that the agency has selected the Morehouse School of Medicine to develop and implement a US$40 million initiative aimed at fighting COVID-19 among racial and ethnic minorities, as well as rural and other socially vulnerable communities.