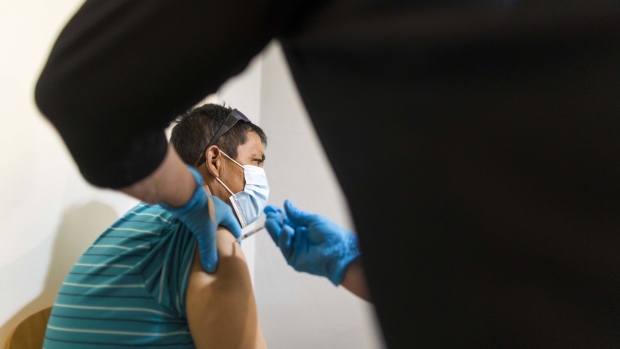 A healthcare worker administers a dose of the Pfizer-BioNTech Covid-19 vaccine at a vaccination site in Lake Worth, Florida, U.S., on Friday, Aug. 13, 2021. Florida's weekly Covid-19 cases rose to a record, with confirmed infections increasing 12% to 151,415 for the seven days through Thursday as Governor Ron DeSantis stakes his claim against mask mandates. , Bloomberg

(Bloomberg) -- President Joe Biden’s chief medical adviser said he expects U.S. regulators to consider whether people who got the one-dose Johnson & Johnson vaccine should get an mRNA shot against Covid-19 as a booster.

“If you boost people who have originally received J&J with either Moderna or Pfizer, the level of antibodies that you induce in them is much higher than if you boost them with the original J&J,” Anthony Fauci said on ABC’s “This Week” on Sunday.

“But the data of boosting the J&J first dose with a J&J second dose is based on clinical data,” he said. “So what’s going to happen is that the FDA is going to look at all those data, look at the comparison, and make a determination of what they will authorize.”

A so-called mix-and-match booster has been discussed among scientists and government experts, though no timeline has been released for when it might be officially considered. The issue is complicated by safety, supply and concern about confusing public messaging.

Food and Drug Administration experts recommended a second Johnson & Johnson shot for people 18 and older last week. They also backed a third dose of the Moderna Inc. shot -- which unlike J&J uses mRNA technology -- for people at high risk of contracting Covid-19. The recommendations require backing by the FDA and the Centers for Disease Control and Prevention, which could come as soon as this week.

The Pfizer Inc.-BioNTech SE vaccine, also based on mRNA technology, was cleared for boosters in September. More than 10 million third shots have been given in the U.S.

Fauci said the individual choice of which booster to get would depend on several factors, including the risk of myocarditis, a heart inflammation that some evidence suggests is a risk for young men who get mRNA vaccines.

“I believe there’s going to be a degree of flexibility of what a person who got the J&J originally can do, either with J&J or with the mix-and-match from other products,” Fauci said on “Fox News Sunday.”

Fauci also said that people could safely enjoy gathering during the U.S. holiday season if vaccinated -- a message to some 66 million eligible people in the country who haven’t been inoculated.

“When you do that, there’s no reason at all why you can’t enjoy the holidays in a family way, the way we’ve traditionally done it all along,” he said on “This Week.”