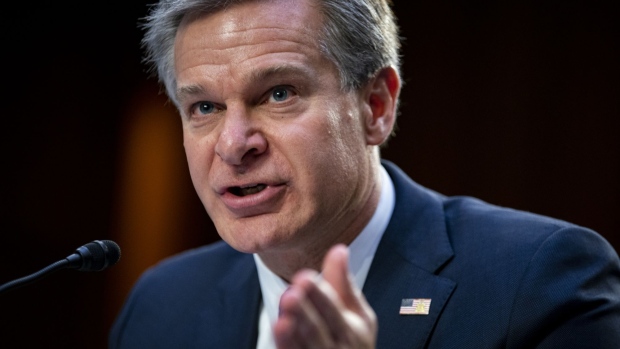 Christopher Wray, director of the Federal Bureau of Investigation (FBI), speaks during a Senate Judiciary Committee hearing in Washington, D.C., US, on Thursday, Aug. 4, 2022. The hearing is titled "Oversight of the FBI." , Bloomberg

(Bloomberg) -- FBI Director Christopher Wray said US officials are still discussing how to address national-security concerns posed by TikTok, in comments that suggested a deal to keep the video-sharing app operating in the US isn’t a sure thing.

Wray reiterated his concerns that the Chinese-owned app could be used by Beijing to control millions of users’ software, steal information, launch hacking attacks or conduct influence operations.

“Whether or not there is something that could adequately address those concerns is a product of very much discussion within the interagency,” Wray said at an event at the Gerald R. Ford School of Public Policy at the University of Michigan.

Wray was referring to the Committee on Foreign Investment in the United States, an interagency body that’s weighing a proposal to allow TikTok to continue to operate in the US under the ownership of Chinese parent ByteDance Ltd.

The arrangement would include routing US user traffic through servers maintained by Oracle Corp., with the US-based database giant auditing the app’s algorithms.

That effort has been slowed over fears the app would remain a threat, with China hawks on the Hill expected to criticize any agreement that stops short of an outright ban, or the sale of the platform to a US company.

The TikTok comments were part of a broader torrent of criticism Wray had for the Chinese government, including its efforts to suppress dissent in the US.

He said the Chinese government targeted the parents of a Chinese student at a major university in the US midwest who posted material online in tribute to protesters who were killed during the 1989 Tiananmen Square massacre in Beijing.

“This is a Chinese American student in an American university,” Wray said. “Within 24 hours of him posting this stuff, the Chinese intelligence services back in China paid a visit to his parents threatening them.”

“There is no country, no government, that represents a more serious, more persistent threat to our innovation, our ideas and our economic security than the Chinese Communist Party and the Chinese government,” Wray said.

Wray also defended the FBI’s work during “hyper-politicized” times and pledged that the bureau will not compromise its independence to please critics.

The Federal Bureau of Investigation recently has come under criticism by former President Donald Trump and his conservative allies for investigations into Trump’s conduct, including carrying out a court-authorized search of his Mar-a-Lago resort in Florida in August. House Republicans have pledged to investigate the Justice Department and FBI when they take over the chamber next month.

“My message to our people is that we are going to follow the facts wherever they lead no matter who likes it,” Wray said. “And I add that last part because what I find increasingly in today’s world is that people, at first, they say ‘Independence, objectivity, go for it, go FBI,’ until they don’t like the result of something that we do.”

“That’s not how independence and objectivity work,” he said.