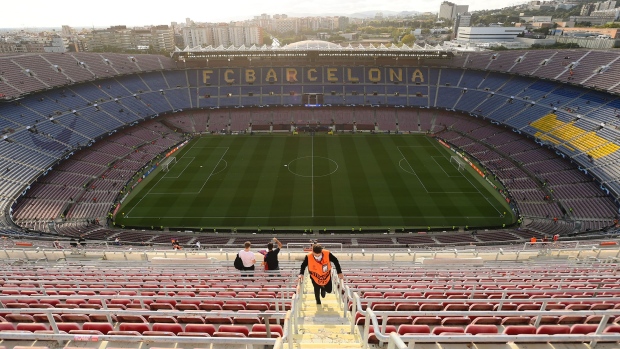 General view of the stadium prior to the UEFA Champions League group E match between FC Barcelona and Dinamo Kiev at Camp Nou on October 20, 2021 in Barcelona, Spain. , Photographer: David Ramos/Getty Images Europe

The Catalan football club asked members to support raising as much as 1.5 billion euros ($1.74 billion) to renovate and further develop facilities at the iconic Camp Nou -- a project known as Espai Barca.

The plan involves renovating the stadium -- Europe’s biggest with capacity for 105,000 fans -- as well as another venue used for other sports like basketball. Both facilities are in a precarious condition, forcing the club to fund regular repairs and pay fines for not meeting European competitions requirements.

Club President Joan Laporta left open the possibility that club members could participater in the funding of the project.

Earlier this month the new management team, which took over in March, presented the result of a due diligence conducted over the previous management’s handling off the club. The report found liabilities of 1.35 billion euros in March 2021. Payroll had jumped 61% in three years, administrative costs were up 56% in and there was a 600% increase in financial costs.

Between June 2019 and March 2021, the club’s net financial debt increased by 514 million euros to 673 million euros, mostly due to investment made on the purchase and sale of players, according to the report. The fragile financial situation forced the club to give up superstar Lionel Messi, considered one of the best players in the history of the game, before the start of this season.

Goldman Sachs, which arranged a private placement of 595 million euros of notes for the club in August, has a mandate to raise the funds for the stadium revamp.

The club is planning a 35-year funding for the plan, with annual interests and debt repayment with the additional revenue generated.