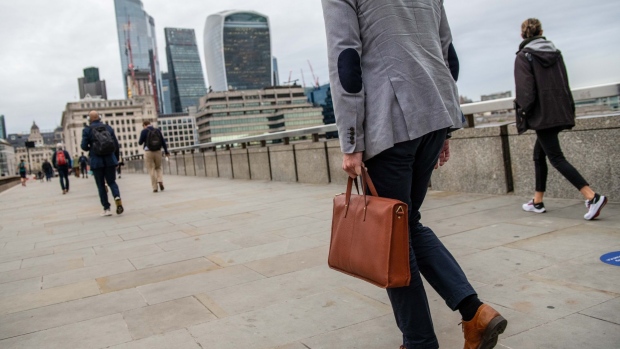 Commuters make their way over London Bridge towards the City of London, U.K., on Thursday, Sept. 30, 2021. Officials have flagged concerns about the labor market after the end of the government’s furlough plan, while households are also facing looming increases in their tax and energy bills that economists say could hurt confidence and reduce the opportunity for hikes. Photographer: Chris J. Ratcliffe/Bloomberg , Bloomberg

The U.K. market watchdog plans to raise the standard of care that finance firms should offer consumers, marking its latest effort to improve safeguards after the mini-bond scandal.

The proposals for a new “consumer duty” are designed to push firms to compete in the interests of retail customers, the Financial Conduct Authority said in a statement Tuesday. Firms will be expected to consider the likely outcomes their customers will receive over the full lifecycle of their product offerings -- a goal the FCA said it will back up with “assertive supervision.”

“Under the consumer duty, firms and our supervisors would increasingly focus on the outcomes consumers experience,” the document said. “Firms would need to assess and evidence the extent to which and how they are acting to deliver good outcomes.”

The focus on consumers comes with the FCA under pressure from a U.K. parliamentary committee to overhaul its operations after London Capital & Finance Plc collapsed in a mini-bond scandal that exposed customers to losses on more than $300 million in investments.

Chief Executive Officer Nikhil Rathi has previously signaled that the regulator is shifting to a more proactive way of working, saying in July the FCA will be “even more assertive to ensure consumer protection and market integrity,”

The FCA is accepting feedback on its proposals until Feb. 15, and expects to make any new rules by the end of July.