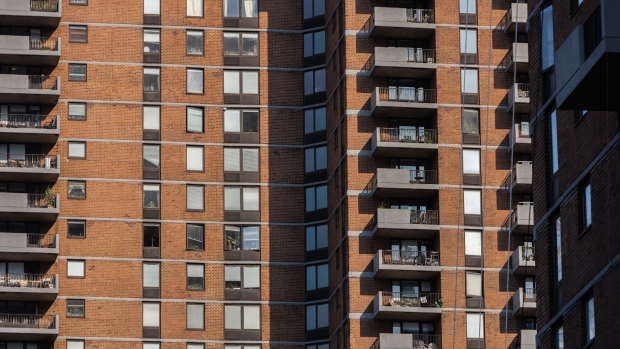 Apartment buildings in the Midtown neighborhood of New York, U.S., on on Monday, July 5, 2021. New York's residential market is heating back up amid the easing of commercial restrictions and lower Covid-19 rates, although the market has yet to return to pre-pandemic levels, Forbes reports. Photographer: Jeenah Moon/Bloomberg , Bloomberg

(Bloomberg) -- The U.S. Federal Communications Commission has adopted regulations to foster more competition for broadband service to the roughly one-third of Americans living in apartment buildings, who often have only one choice for a provider.

The rules prohibit broadband providers from entering into certain revenue-sharing agreements with a building owner that keeps competitive providers out of buildings, the FCC said in a news release. The rules, adopted on a 4-0 vote, also require providers to tell tenants if their building has an exclusive marketing arrangement with a provider, the agency said.

“The rules we adopt today will crack down on practices that prevent competition and effectively block a consumer’s ability to get lower prices or higher quality services,” said FCC Chairwoman Jessica Rosenworcel said in the news release.

Cable providers have argued that curbing the practices cited by the FCC may inhibit investment and deployment in buildings.