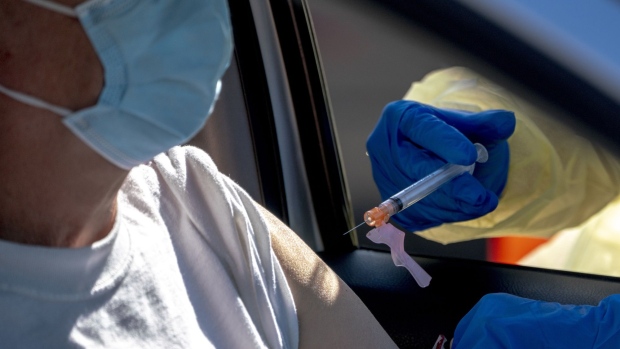 (Bloomberg) -- Drugmakers won’t have to perform giant efficacy trials for new vaccines or booster shots developed to combat new variants of the coronavirus, the U.S. Food and Drug Administration said.

In documents released by the agency Monday, it said a determination of effectiveness for new vaccines against variants should be based on so-called immunogenicity studies, in which researchers give vaccines to people and then conduct lab tests to measure the immune response the vaccine produces in their blood. These tests, similar to what is done for annual flu shots, are far simpler to conduct than the massive efficacy studies needed for clearance of the initial vaccines.

The agency said that it would encourage drugmakers to test modified vaccines against previously vaccinated people, which could come in the form of a booster shot, and in those who haven’t been vaccinated and would be receiving the modified dose as their first shot.

“By issuing these guidances, we want the American public to know that we are using every tool in our toolbox to fight this pandemic, including pivoting as the virus adapts,” said Janet Woodcock, acting FDA commissioner, in a statement.

Vaccine strains have been rapidly evolving, and variants common in South Africa and Brazil in particular have mutations that may reduce the effectiveness of existing vaccines. That has led companies including Moderna Inc. and Pfizer Inc. to start exploring plans for developed modified vaccines or booster shots.