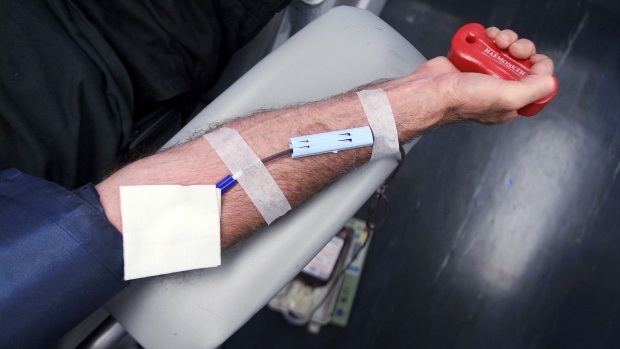 MISSION HILLS, CA - SEPTEMBER 14: Dan Simansky donates blood at Providence Holy Cross Medical Center for victims of the September 12 head-on collision between a Metrolink commuter train carrying 222 passengers and a freight train in Chatsworth, California, on September 14, 2008 in the nearby Los Angeles area community of Mission Hills, California. Providence Holy Cross Medical Center is caring for some of the 95 critically or seriously injured. 24 people were killed in the crash and a 25th has died in a hospital. Metrolink is putting the blame on a Metrolink engineer who was killed in the crash for not stopping for a red light so the freight train could pass on a parallel track. It is the worst disaster in Metrolink history and the worst in the US in 15 years. (Photo by David McNew/Getty Images) , Photographer: David McNew/Getty Images

(Bloomberg) -- US regulators are poised to ease restrictions on blood donations from gay and bisexual men that have been in place since the global HIV outbreak began in the 1980s.

The Food and Drug Administration said results from an agency-funded study “will likely support a policy transition to individual risk-based donor screening questions for reducing the risk of HIV transmission.” Under current policy, all men who have had sex with men in the past three months are ineligible to donate.

The agency expects to release updated draft guidance in the coming months, which will incorporate findings from the study and consider international standards for donor deferral policies, an FDA spokesperson said in a statement. Regulators are discussing next steps, including how and when the results of the study will be made public.

Although gay, bisexual and other men who report male-to-male sexual contact are disproportionately affected by HIV, there have long been calls from blood banks and advocacy groups to revise the regulations, which they argue are discriminatory and lacking scientific justification. Centers test donated blood for numerous pathogens including HIV, allowing them to detect and discard contaminated donations. However, HIV may be undetectable in newly infected donors for about 7 to 10 days, according to the American Red Cross.

The Red Cross was one of the blood banks included in the FDA’s study, along with community health centers in the US. The study began in December 2020 and concluded in September, but the FDA is still reviewing results.

The Wall Street Journal reported earlier that gay and bisexual men in monogamous relationships would be eligible to donate blood under the updated FDA guidelines. Potential donors would instead be required to answer a risk assessment questionnaire, the newspaper said. Questions are still being finalized, and will likely ask about new sexual partners within the last three months; those who report new partners may be required to wait before donating.

Restrictions on blood donations from men who have sex with men originated in 1983 after multiple cases in which patients became infected with HIV via transfusions. In 2015, the FDA expanded eligibility to gay and bisexual men who abstained from sex for one year before donating. During the pandemic, amid widespread blood shortages, the agency shortened the abstention period to three months. In January, a group of US senators led by Wisconsin Democrat Tammy Baldwin urged health officials to end the restrictions.

(Updates with statement from the Food and Drug Administration.)