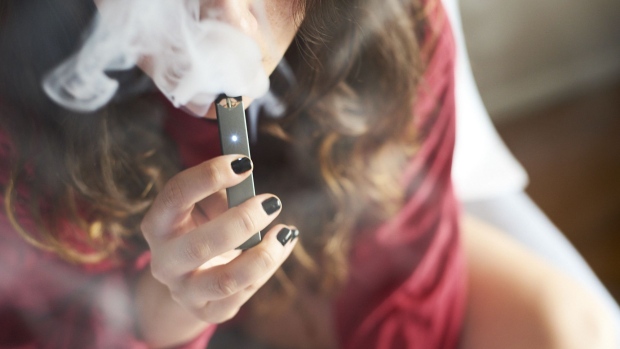 A person smokes a Juul Labs Inc. e-cigarette in this arranged photograph taken in the Brooklyn Borough of New York, U.S., on Sunday July 8, 2018. Juul Labs, the maker of the popular e-cigarette brand that has recently come under fire from health officials over its popularity with young adults, plans to introduce a line of lower-nicotine pods. The company will begin to sell pods with a 3-percent nicotine concentration in its mint and Virginia tobacco flavors later this year, according to a statement Thursday. , Bloomberg

(Bloomberg) -- The US Food and Drug Administration is getting ready to order Juul Labs Inc.’s e-cigarettes off the market, the Wall Street Journal reported, citing people familiar with the matter.

The decision could be announced as early as Wednesday, the Journal reported. The FDA has already banned the sale of fruity and sweet flavors for e-cigarettes. The agency allowed some products made by Juul rival NJOY Inc. to remain on the market earlier this year, and last year authorized British American Tobacco Plc’s e-cigarette Vuse.

Shares of Altria Group Inc., which has a stake in Juul, fell 6.8% at 9:38 a.m. in New York trading. The owner of the Marlboro brand in the US has written down most of the value of its Juul investment due to ongoing regulatory challenges.

A spokesman for Altria declined to comment. FDA representatives didn’t immediately respond to a request for comment.