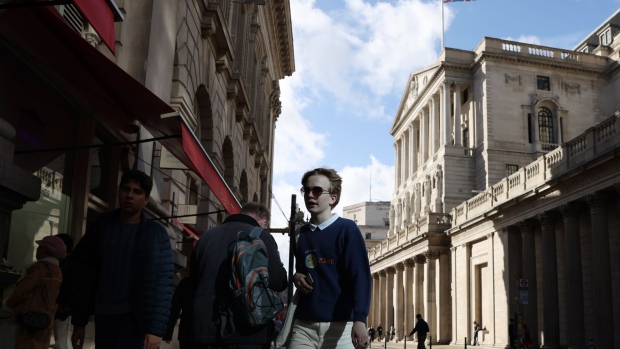 A healthcare worker administers a dose of a Pfizer-BioNTech Covid-19 vaccine to a child at a pediatrician's office in Bingham Farms, Michigan, U.S., on Wednesday, May 19, 2021. Anthony Fauci, head of the National Institute of Allergy and Infectious Diseases, said in a MSNBC interview that he expects all children will be eligible for a Pfizer-BioNTech Covid-19 vaccine by the end of the year. Photographer: Emily Elconin/Bloomberg , Bloomberg

The benefits of the Covid-19 vaccine by Pfizer Inc. and BioNTech SE for children ages 5 to 11 are likely to outweigh the risks, according to a U.S. Food and Drug Administration staff analysis ahead of an advisory panel meeting next week.

Singapore is set to restrict access to the workplace for those who are unvaccinated from January unless they test negative daily as part of plans to resume normal activities in the pandemic.

With Europe facing a virus resurgence, Austria may apply lockdown measures to unvaccinated people and Russia reported record daily deaths. Germany’s cases rose to a level last seen in May.

New Orleans is staging its first float parade in 18 months on Saturday night, with health officials conducting a Covid-19 survey during the event, according to Nola.com.

Known as Krewe of Boo, the Halloween-themed parade is an opportunity for the Crescent City to revive party tourism curtailed by the pandemic. Mayor LaToya Cantrell said New Orleans may have a regular Mardi Gras next February.

An outbreak at a Maine elderly care center has spread to more than 50 residents of 84-bed facility after a staff member tested positive earlier this month, the Portland Press Herald reported. Four residents of the Rumford Community Home have died, the newspaper reported.

About 87% of the residents were fully vaccinated, with a similar percentage for staff. Maine has one of the U.S.’s highest rates of vaccination, with almost 76% of people having received at least one dose, compared with the national average of 66.2%.

Austria has laid out a framework for potential new lockdown measures to apply only to unvaccinated people, as inoculations lag and cases rise sharply.

“I will do everything I can to ensure that the health system in this country does not reach its limit and is not overloaded because we have too many procrastinators,” Chancellor Alexander Schallenberg said in a statement Saturday. Some 220 ICU beds are currently occupied.

If the number of Covid patients in intensive care units hits 500, or 25% of the country’s capacity, unvaccinated people would be barred from hotels and restaurants. If ICU capacity reaches one-third, or 600 units, a lockdown would go into effect for the unvaccinated, who would only be allowed to leave their homes for certain reasons.

Germany’s new infections rose to a level last seen in May as the pandemic resurges with the onset of colder weather in large parts across Europe.

South Korea has reached its goal of fully vaccinating more than 70% of its population, a precondition the government set for an easing of restrictions.

About 35.9 million of the nation’s 51.3 million residents had been fully vaccinated as of 2 p.m. local time Saturday, the Korea Disease Control and Prevention Agency said in a statement.

Russia reported a record number of new cases and deaths Saturday as people remain hesitant to vaccinate despite the surge.

The national coronavirus headquarters said there were 37,678 new cases and 1,075 deaths in the last day, the most in both categories since the pandemic began. President Vladimir Putin ordered nationwide non-working days for the first week of November to slow the spread while many regions, including Moscow, have announced harsher lockdowns.

Singapore is set to restrict access to the workplace for those who are unvaccinated from January unless they test negative daily as part of plans to resume normal activities in the pandemic.

“Unvaccinated employees will not be allowed to return to the workplace unless they have tested negative for Covid-19 before returning to the workplace, and they will need to pay for the costs of these tests,” the health ministry said in a statement on Saturday.

European Union diplomats have been banned from attending most social events at the COP26 climate change talks due to the surge in cases in the U.K.

Two officials attending the United Nations summit in Glasgow, Scotland, said the EU will not host its annual reception, and that guidelines have been issued for socializing in order to prevent the spread of infections. The bloc’s diplomats will be allowed to attend only crucial events at the conference, which runs from Oct. 31-Nov. 12.

The staff of the U.S. Food and Drug Administration said the benefits of Pfizer and BioNTech SE’s Covid-19 vaccine for young children likely outweigh its risks.

According to the staff report, posted on the FDA website, the vaccine’s capacity to prevent hospitalizations and deaths likely exceed the risk of adverse outcomes such as the heart condition myocarditis, which has been reported in some younger males who have received messenger RNA shots.

Earlier, Pfizer posted a document on the FDA website saying its shot was 90.7% effective against symptomatic cases in kids ages 5 to 11.

Five of the six had returned from a trip to Inner Mongolia and one is a close contact, according to a separate statement from the Beijing Municipal Health Commission, which later said another three domestic cases had been found in the capital on Saturday.

The local government of Beijing’s Changping district, where the infected residents live, earlier announced mass testing in some residential compounds. Other local infections on Friday were found in Gansu province, Inner Mongolia, Ningxia and Yunnan.

Singapore is leading a revival in air traffic in Asia as the region follows North America and Europe in reopening borders. By January, the city-state is predicted to reach 84% of the weekly flights to Europe it had in March last year, before the clampdown on travel. There’ll also be 1,519 flights from the financial hub to elsewhere in Asia, compared with only 194 in May 2020, data from aviation analytics firm Cirium show.

Australia, Thailand, Vietnam and Malaysia are among others ditching Covid-Zero policies and announcing plans to allow fully-vaccinated visitors from certain places to enter without having to quarantine.

Walmart Inc., the largest private-sector employer in the U.S., is calling its corporate staff back to the office from Nov. 8 after more than a year and a half of remote work during the coronavirus pandemic.

The planned return starts about a month after the deadline the retailer imposed for headquarters and regional staff to get vaccinations or approval for an exemption. The Bentonville, Arkansas-based company said two weeks ago that “the overwhelming majority” of those employees have gotten shots.

U.K. Chancellor of the Exchequer Rishi Sunak told the Times of London that the country’s inoculation program means there won’t be any more lockdowns, shrugging off warnings from some medical experts that the health-care system could be overwhelmed this winter.

About one in 55 people living in private households in England had Covid-19 in the week ending Oct. 16, compared with 1 in 60 the week before, according to estimates from the Office for National Statistics. Infections were still highest in school children ages 7 to 11.