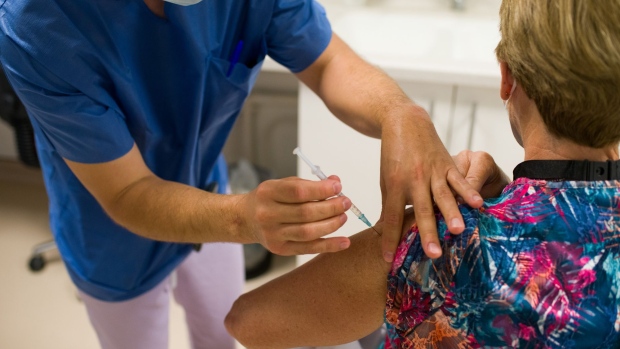 A healthcare worker administers a third dose of the Pfizer-BioNTech Covid-19 vaccine at a senior-living facility in Paris, France, on Thursday, Sept. 16, 2021. France is on the forefront of a carrot-and-stick approach that seeks to maintain a high level of vaccinations. Photographer: Nathan Laine/Bloomberg , Bloomberg

(Bloomberg) -- The Food and Drug Administration plans to authorize a third booster dose of the Pfizer Inc.-BioNTech SE vaccine imminently, according to a person familiar with the matter.

The expected emergency clearance will be for people 65 and older, those most susceptible to severe disease and people whose jobs put them at risk, the person said.

An announcement is planned for Wednesday, the person said.

The emergency clearance, which is in line with a recommendation from FDA advisers, is narrower than the full approval Pfizer had sought. It means that the Biden administration would have to forgo, temporarily, a wider rollout of boosters that it had proposed last month.

However, the authorization would leave the door open for the FDA to consider broader use of boosters, including in younger adults, as more data on their safety and efficacy become available. And it assures that many of the older Americans who were first in line for the initial shots will be among the earliest to get additional protection.