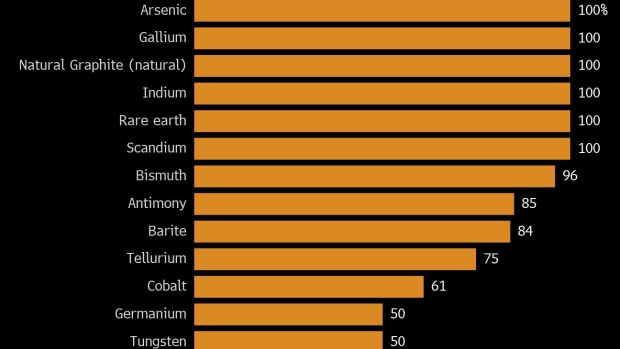 China’s grip on the world’s rare earths market is in focus once again amid speculation the dominant producer could choke off supplies as the trade war escalates. But they’re not the only strategic minerals to watch if China’s relations with the U.S. deteriorate.

President Donald Trump’s blitz on China’s flagship maker of telecoms hardware, and the possibility that more tech companies could be targeted, has raised fears that Beijing’s retaliation may embroil multiple industries using critical commodities. Rare earths have drawn most attention after President Xi Jinping made a point of visiting a plant this week. China has used them before as a political weapon, notably after a maritime dispute with Japan in 2010.

The potential for a trade-based cold war also highlights the emerging industries where China is ahead in securing supply chains. That includes batteries for electric vehicles and mass storage, which rely on cobalt, lithium and a cluster of other materials that were niche but are now only growing in significance.

Typically viewed as a mass consumer of commodities, here are some of the areas where China has leverage, or a big gap, over the U.S in terms of supply.

China has already opened up a huge lead, not only in producing electric vehicles -- our transport of the future -- but also in making the batteries that run them. In cobalt chemicals, the Asian nation’s share of world output was about 80% last year, according to Darton Commodities Ltd. It’s also a major player in the mining of the raw material, through its companies’ presence in the Democratic Republic of Congo, which accounts for about 70% of world supply.

“Relying on non-domestic resources for the elements that will power America’s future leaves the country widely exposed,” according to Vivas Kumar, a former Tesla Inc. supply chain senior executive who’s now principal consultant at researcher Benchmark Mineral Intelligence. China has 67% of the world’s battery cell manufacturing, versus 9% for the U.S., according to Benchmark.

The U.S. could “face the same issue as was previously encountered with its dependence on foreign oil. This goes beyond electric vehicles and batteries - it is now a matter of American national security,” Kumar said by email.

That could give momentum to producers looking to expand the U.S. footprint in battery metals. “What people have recognized is that there needs to be diversification of supply, and there are opportunities within our own borders,” said Mitchell Smith, chief executive officer of Global Energy Metals Corp., which is developing U.S. cobalt projects.

The sector got a jolt this week when state media reported on President Xi’s stop at a rare earths plant in Jiangxi, an industry hub. It triggered a frenzy of speculation that China was preparing to wield its stranglehold on supply as a counter in the trade war. The U.S. relies on China for about 80% of its rare earths, which include neodymium, praseodymium and yttrium. They end up in applications such as wind turbines and EVs, but also smartphones and military equipment.

Rare earths are closer to the front line of the trade war than some of the other minerals. Beijing has levied duties on America’s only producer but escaped similar treatment from the Trump administration in its own list of prospective tariffs on roughly $300 billion worth of Chinese goods that could be targeted in the next wave of measures.

Some U.S. lawmakers were already giving wider attention to mineral security even before the latest ratcheting up of tensions. Late in 2017, President Trump ordered a deeper study of how the nation can tackle its dependence on overseas supplies. Senator Lisa Murkowski of Alaska is introducing an American Minerals Security Act aimed at encouraging domestic production by speeding up permits, authorizing more research, and supporting recycling.

The government last year expanded its list of critical minerals to 35, which includes cobalt, lithium and rare earths. Those include several in which China is a significant supplier: arsenic, used in semiconductors; indium (LCD screens); antimony (batteries); scandium (fuel cells); bismuth (medical and atomic research). See the full list here.

--With assistance from Luzi Ann Javier and Marvin G. Perez.

To contact Bloomberg News staff for this story: Martin Ritchie in Shanghai at mritchie14@bloomberg.net

To contact the editors responsible for this story: Phoebe Sedgman at psedgman2@bloomberg.net, Jason Rogers