When Bombardier first announced plans to launch the CSeries family of commercial jets in 2008, the company described the program as “game-changing.”

According to the news release, issued during the Farnborough International Airshow, the sleek, fuel-efficient airliners would build on Bombardier’s transportation expertise, which included light-rail vehicles and business jets.

The CSeries ultimately lived up to its “game-changing” expectations, but in ways Bombardier’s leadership could have never imagined.

Thirteen years later, after offloading its once-prized CSeries program and selling its regional plane and rail divisions, the Montreal-based firm has transformed into a pure-play business jet company.

And amid a pandemic that has seen demand for private travel surge, investors have rewarded Bombardier, sending its shares up roughly 250 per cent over 2021. The stock is now among the best performers on the Toronto Stock Exchange.

‘THE HOTTEST AREA’: BEHIND BOMBARDIER’S CLIMB

“The chief reason behind this year’s performance is investors believing bankruptcy is not a near-term possibility, and the fact [that] business jets are currently the hottest area in the aerospace industry,” said Norman Levine, managing director of Portfolio Management Corp., in an email to BNN Bloomberg.

But context, he added, is critical. Bombardier’s shares may be on a tear this year in percentage terms, but they were in the doldrums last fall. In fact, the stock hit an all-time low of 28 cents per share in November 2020.

And for long-time holders, Bombardier’s recent runup has done little to make them whole: in 2000, shares hit a record high of $26.30.

“Where this stock once traded and where it trades now bear no resemblance as the company is not the same,” wrote Levine. “Back then it owned what is now Bombardier Recreational Products, was also making commercial airplanes, and had not yet bet the farm on [the CSeries], which nearly bankrupted the company.”

Still, the stock’s 250 per cent gain over 2021 has captured Canadians’ attention.

“We think they are eager to understand how the story has changed from [Bombardier’s] troubled past,” he wrote in an email to BNN Bloomberg.

That past includes multiple rounds of government aid, thousands of layoffs, the 2017 offloading of its CSeries program to Airbus for the token price of one Canadian dollar, and the sale of its rail division to Alstrom.

But it also includes innovation, particularly in the mid-sized and super mid-sized private jet segment, where Bombardier boasts a dominant, albeit diminishing, market share. 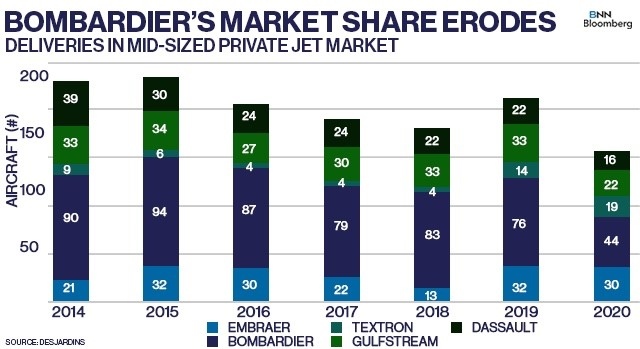 “Becoming a pure-play business jet manufacturer has lined up perfectly with what has been the start of a brand-new business jet cycle,” wrote Burrows. “[Bombardier has] been able to take full advantage of limited supply and increased pricing on their end product.”

And still today, demand is robust. According to research by Morgan Stanley, private aircraft flights in the U.S. are up 40 per cent between 2020 and 2021, approaching the industry’s peak in 2007.

But as we learned shortly after those heady, pre-recession days, private jet demand is extremely sensitive to economic changes.

“Private jet sales are wildly cyclical, fluctuating mostly with corporate profits,” wrote Brian Madden, senior vice-president and portfolio manager at Goodreid Investment Counsel. “So now, without the commercial aerospace unit and the train business to keep the lights on during lean years for private jet sales, this company will be feast or famine even more so than in the past.”

And while demand for commercial travel continues to languish, it is expected to eventually recover. Boeing, for example, recently said it expects the industry to rebuild to 2019 levels of traffic by 2024.

Konark Gupta echoes the concern that Bombardier’s run will last as long as travellers fear crowded commercial planes. In a November note to clients, the Scotiabank analyst argued Bombardier’s free-cash-flow strength this year was driven largely by “pandemic-driven demand tailwinds.”

“Thus,” he wrote, “we are mindful that order activity could fade over time.”

THE TROUBLE WITH TWEAKS: THE COMPETITIVE LANDSCAPE

And even if the private-jet boom lasts longer than anticipated, competition in the industry is growing increasingly fierce.

According to another note by Gupta, Gulfstream alone has announced plans to launch three new jets over the next four years, while Dassault is planning to unveil two large-cabin Falcon jets.

Bombardier, for its part, unveiled an update this fall to its popular Challenger 3500 jet. The upgrades include wireless device chargers, a 24-inch, 4K display and a voice-controlled cabin to manage lighting and temperature.

But some fear the tweaks may not be enough.

“We believe [Bombardier] is now more likely to roll out new models, derivatives or refreshes rather than staying quiet, in order to remain competitive,” wrote Gupta. “[Bombardier] could be at risk of losing market share and facing revenue/margin headwinds if it doesn't invest in new products.”

Of course, developing and producing a clean-sheet private jet is an expensive and risky endeavor. And while Bombardier is in a much-better financial position than years past, with no debt maturing until 2024, its competitors, Levine noted, are better financed.

All told, Bombardier is not for the faint-hearted investor, Madden said.

“Can a trader make money from time to time trading it, knowing that Quebec and Canada have their backs, putting a floor under the downside and leaving them the upside? Yes,” he wrote. “We choose not to.”