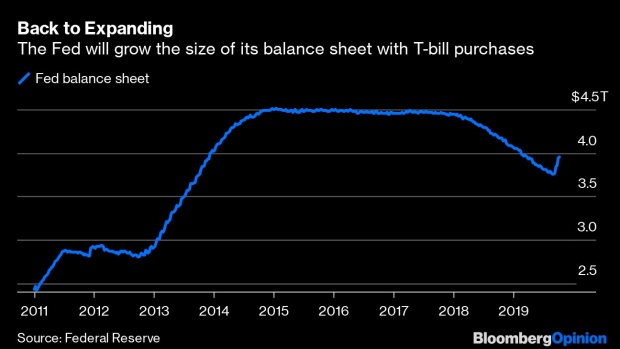 (Bloomberg Opinion) -- Strategists at Bank of America Corp. published a report on Friday that said “the Fed needs a bazooka of asset purchases.” However, they said, that’s unlikely to happen, and the central bank will probably buy only $25 billion to $50 billion a month in Treasury bills, “to guard against the perception of QE.”

The bank announced on Friday that it will begin purchasing $60 billion of bills a month, starting Oct. 15, to keep control over short-term interest-rate markets. It will keep doing so “at least into the second quarter of next year,” which gives officials some flexibility to change the pace and length of purchases. On top of that, the Fed will continue to conduct overnight and term repo operations until at least January, presumably to ensure there are no serious flare-ups in short-term interest rates around the end of the year.

A few things stand out about this announcement. First is the timing. Presenting the Fed’s plan now, rather than as part of its Oct. 30 interest-rate decision, is a transparent effort to emphasize that the bill purchases are not about easing monetary policy but rather a more mechanical process of adding reserves. Indeed, the central bank noted in its statement that “these actions are purely technical measures” and “purchases of Treasury bills likely will have little if any impact on the level of longer-term interest rates and broader financial conditions.”

At the same time, the magnitude of the purchases seems destined to complicate the message for Fed Chair Jerome Powell and other policy makers. Yes, the $60 billion a month is probably rooted in some analysis of what needed to, as the statement says, “ensure that the supply of reserves remains ample even during periods of sharp increases in non-reserve liabilities.” But the figure is nonetheless a bit of sticker shock to traders who just three months ago were dealing with a period of balance-sheet reduction.

Since the Fed announced it would stop balance-sheet normalization, it has cut interest rates twice, and the bond market is indicating it could do so again later this month. Basically, the end of the runoff ushered in a wave of rate cuts. Now the central bank is actively buying bills. Even though it’s technical in nature, it’s going to be a continuing battle to convince traders that the fed funds rate could hold steady in the next several months if the economic data come in as expected.

It’s true, as Bank of America notes, that the Fed has already added about $180 billion in reserves through repo operations. But revealing outright Treasury purchases nevertheless signals that the central bank overestimated how far it could reduce its balance sheet without straining implementation of its monetary policy. Bank of America, in its “bazooka” comment, said the Fed could consider adding firepower by buying short-term Treasury notes as well, but the central bank stopped short of that.

For almost two years, the Fed was allowing some of its maturing debt to run off, in what former Chair Janet Yellen once equated to “watching paint dry.” That gradual approach worked when reserves were on their way down. On the way up, we have what Bloomberg Intelligence’s Ira Jersey calls a “big bang.”

If there’s one thing made clear by this announcement, it’s that the Fed is ready and willing to pull out all the stops to tame the short-term rate markets after their tantrum last month.