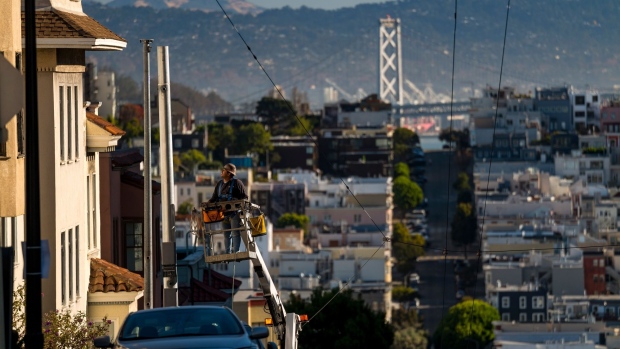 A worker uses a scissor lift beside homes in San Francisco, California, U.S., on Tuesday, Dec. 8, 2020. Declines in rent prices are steepening from earlier in the pandemic, a sign that people with the flexibility to move are leaving an area that's still among America’s priciest for housing. Photographer: David Paul Morris/Bloomberg , Bloomberg

Lower supply, as production instead shifts down the coupon stack, and Federal Reserve buying have helped boost the coupon’s price, which touched 105-15+ Monday morning in New York. In terms of Treasury option-adjusted spread, the coupon offers negative 34 basis points as of Friday’s close, down from zero at year-end and positive 15 basis points at the end of November.

The price rally and spread tightening have occurred despite the coupon sporting a ramped prepayment speed of 53.4 CPR on its 2019 vintage loans, the highest among the 2 per cent to 4 per cent coupons of similar vintage. This means that should the current level hold, about 53 per cent of the principal balance within those mortgage-backed securities will be prepaid annually. As prepayments are returned to investors at par, this can weigh on performance.

There is a helpful feature of the current landscape that’s supportive of prices, Nomura Holdings Inc. analysts said. “A significant portion of FN 2.5 per cent outstanding is now held by the Fed, and this could continue to keep the FN 2.5 per cent roll special,” they wrote in a research note.

Since the central bank resumed quantitative easing back in March, it’s purchased US$338.2 billion of the FNCL 2.5 per cent. That’s the most of any coupon in the mortgage-backed security universe over that time, according to data from the Federal Reserve Bank of New York.