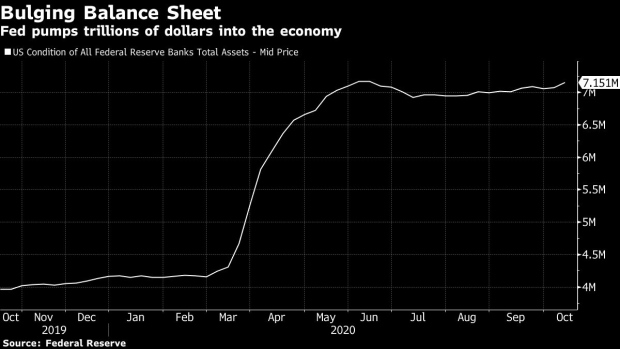 Traffic passes the Marriner S. Eccles Federal Reserve building in Washington, D.C., U.S., on Tuesday, Aug. 18, 2020. In addition to helping rescue the U.S. economy amid the coronavirus pandemic, Fed Chair Jerome Powell and colleagues also spent 2020 finishing up the central bank’s first-ever review of how it pursues the goals of maximum employment and price stability set for it by Congress. Photographer: Erin Scott/Bloomberg , Bloomberg

(Bloomberg) -- The Federal Reserve and other central banks will eventually discover that breaking up isn’t easy after partnering with their governments and the financial markets to avert a pandemic-driven depression.

Investors and lawmakers enamored with cheap money may well balk when monetary authorities try to throttle back their quantitative easing and other stimulus measures.

“They are increasingly on what I call a no-exit paradigm,” Allianz SE chief economic adviser and Bloomberg Opinion columnist Mohamed El-Erian said on a panel discussion last week.

The problem isn’t pressing -- – and in fact is probably one central bankers would be glad to have if it meant their economies were strong.

Instead, faced with slowing global growth and resurgent infections, the focus of policy makers at last week’s all-virtual International Monetary Fund and World Bank meetings was on more support for the world economy, not less. Central banks are pulling out the stops to do all they can, boosting financial markets with massive asset purchases and pushing government borrowing costs to record lows.

Fed Chairman Jerome Powell has repeatedly pressed for more aid to support to the economy until it’s clearly out of the woods. “The recovery will be stronger and move faster if monetary policy and fiscal policy continue to work side by side,” he told business economists on Oct. 6.

The trouble may start after a virus vaccine is approved and distributed and the U.S. and world economies begin to return to normal. If the Fed and other central banks are constrained from scaling back emergency stimulus at that point, the continued flood of liquidity could spur asset bubbles and even too-rapid inflation.

Rebecca Patterson, director of investment research at Bridgewater Associates, said she saw some merit to arguments that the U.S. ultimately will see faster inflation because of continued aggressive fiscal stimulus. “It’s something investors really haven’t had to think about for the last few decades,” she told an Oct. 13 Council on Foreign Relations briefing. “Whether we get it or not, preparing for that risk scenario is pretty important.”

Patterson said that economic policy has entered a new paradigm, with independent central banks and governments working closely together to fight the pandemic. Monetary policy makers are buying up government bonds while fiscal policy practitioners are issuing more of them to finance mammoth budget deficits. “Fiscal has become the dominant driver,” Patterson said.

The relationship between the central banks and their governments is “sort of a honeymoon situation because their interests are aligned,” former European Central Bank chief economist Peter Praet.

“There is no inflation, so the central banks ask the fiscal authority to spend more to support aggregate demand,” Praet said on an Oct. 15 panel discussion hosted by the Institute of International Finance. “But when their interests start to diverge, that’s a very delicate moment.”

Former Fed Governor Randall Kroszner agreed. The big debts that governments are racking up are “going to make it difficult for central banks to raise rates when they feel the need to do so” because that will increase borrowing costs, he said on the same panel as Praet.

The Fed will also find it politically hard to trim its huge balance sheet after Congress effectively authorized an increase by allocating money to the Treasury to set up emergency lending facilities with the U.S. central bank, said Kroszner, now a University of Chicago professor.

The debt deluge may have other consequences. The Treasury market is now so large that that it may not be able to function smoothly on its own during times of stress, according to Fed Vice Chair for Supervision Randal Quarles.

He told a virtual discussion organized by the Hoover Institution on Oct. 14 that it was an “open question” whether the Fed would have to keep buying Treasuries to aid the working of the market. The central bank is currently purchasing about $80 billion of Treasuries a month.

Quarles clarified those remarks the next day, telling the IIF that he didn’t mean to suggest that he saw a need for a permanent Fed backstop of the Treasury market.

Central bank leaders from Europe, Japan and the U.K. stressed the importance of maintaining the independence of their institutions at a virtual international banking seminar on Sunday.

“We have to steer clear of what would be regarded in popular parlance as fiscal dominance,” European Central Bank President Christine Lagarde said.

Andrew Bailey, governor of the Bank of England, said the independence of central banks hasn’t been eroded by their coordination with governments to help economies through the coronavirus crisis this year.

The bond market is underestimating how strongly the U.S. economy will rebound, and that may lead to a “mini taper tantrum” next year, according to John Herrmann at MUFG Securities Americas. In the 2013 taper tantrum, yields surged after the Fed suggested it would begin scaling back its bond purchases.

El-Erian said that the U.S. central bank has “conditioned the market to such an extent that every time the Fed tries to step back, the market forces them back in” by selling off and tightening financial conditions.

Former Bank of England policy maker Paul Tucker agreed that the financial markets have come to expect periodic support from central banks after years in which monetary policy makers effectively delivered just that.

“I wait, longing for a central banker to do for financial stability what Paul Volcker did for inflation, which is to break that psychology that you, the capitalist markets, are actually utterly dependent on the Federal Reserve and other central banks, propping up prices come what may,” Tucker said.