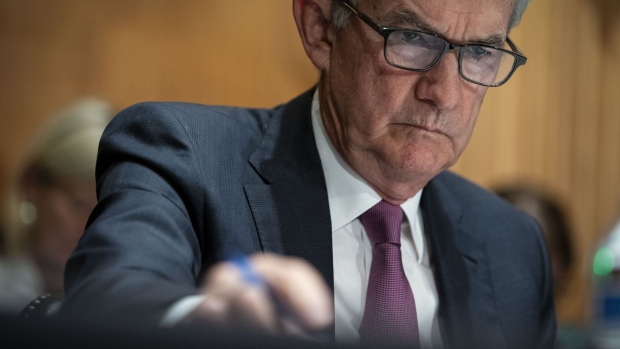 (Bloomberg) -- The fight over who should lead the Federal Reserve for the next four years has intensified questions about whether the central bank is doing enough to help combat climate change.

While Chair Jerome Powell enjoys broad support from Republicans and many Democrats for his handling of monetary policy and his response to the pandemic, his critics on the left have attacked him for, among other things, acting too slowly to focus the Fed’s attention on climate.

A handful of progressive Democrats including New York Representative Alexandria Ocasio-Cortez recently called on President Joe Biden to dump Powell and nominate a greener replacement when his four-year term ends in February. Climate advocacy groups followed that with a petition signed by more than 40,000 people urging Biden to do the same.

This isn’t the first time that filling the Fed chair has provoked a battle inside the party that controls the White House, but never before has climate policy had a significant place in any Fed nomination. And that is drawing attention to a wider debate over whether the central bank has the tools, the authority or the appetite to play a leading role in battling global warming and its potential economic fallout.

“This is not what we should be talking about in the discussion over the Fed chair,” said Claudia Sahm, a former Fed economist who is a senior fellow at the Jain Family Institute. “It’s nonsense to say the most important institution in fighting climate change is the Fed.”

Progressives including Ocasio-Cortez argue that the Fed is just one of the institutions that should take climate change seriously, not least because its responsibility includes keeping financial markets stable -- and climate change threatens that.

The Fed has, in fact, already waded into the climate change debate, but it’s done so gingerly, and it waited until after Biden’s election to take a number of important steps.

After years of lagging other central banks, the Fed has ramped up its research on climate change and is actively considering the risks that a warming planet poses to financial stability. In the past year, bank officials created a climate committee, joined a key global group of central banks on the issue and began working with the Treasury Department on Biden’s climate executive order.

The bankruptcy of PG&E Corp., one of the nation’s largest utility companies, following the several wildfires in California was a wake-up call for the central bank, according to Sarah Dougherty, who worked as an energy analyst at the Atlanta Fed for seven years including during Hurricane Katrina.

“Times have changed,” said Dougherty, who’s now senior green finance manager at the Natural Resources Defense Council. “Computers used to not be essential -- now they are. Fossil fuels used to be something everyone needs, but that’s not the case anymore. As times have changed, you need to change what you consider for the risks.”

The Fed’s inroads so far have annoyed lawmakers on the right, with Republican Senator Patrick Toomey calling the climate research “mission creep,” but they’ve also failed to satisfy many on the left. Those tensions have raised risks for the central bank. While the Fed is independent in some respects, Congress sets -- and can change -- the limits of its powers. For that reason, the bank has long been wary of straying into actions that could be interpreted as too political.

Others see the focus on the Fed as simply unhelpful.

Yet, he adds, “Telling the Fed it should care about climate change is a distraction and an excuse not to do the necessary legislation or regulation that would actually matter. The risk is this reduces the pressure on Congress and the executive branch to actually do something.”

Dougherty argues Fed officials can play a key role instigating change. They could ask lenders to stress-test their capital for potential natural disasters such as wildfires and flooding that are increasing in the U.S. The Fed could also force banks who lend to companies exposed to fossil fuels and disasters to hold higher capital buffers, thereby protecting the banks and making the credit extended to non-green firms more expensive.

Fossil-fuel investments are “perfect examples of systemic risks threatening our financial stability,” said Claudia Marchena, a staff member for Ocasio-Cortez whose office co-wrote the letter demanding Biden nominate a more climate-focused Fed chair. It’s possible for the Fed to act within its authority and Congress to make changes at the same time, she said.

Evergreen Action, a climate advocacy group, also suggested imposing portfolio limits on how much greenhouse gas pollution a bank can finance and eventually exclude all fossil fuel investments from portfolios.

To Peterson’s Posen, however, using the Fed’s supervisory authority over banks to force the economy away from environmentally harmful investments is folly.

“This is a stretch both in terms of the actual intent of financial supervision and its effectiveness,” he said, not least because non-bank financial lenders beyond the Fed’s reach will step in to provide the credit.

Posen and Sahm said a broader approach is required. All the top federal financial regulators, including the Fed, the Office of the Comptroller of the Currency and the Federal Deposit Insurance Corp., should be given new climate-related regulatory guidelines by Congress.

Unlike the Fed, other central banks have a de-facto green mandate. For example, the European Central Bank has a secondary mandate of supporting the European Union’s general economic policies, which include addressing climate change.

“Congress hasn’t articulated a clear, unified vision of what they want the country to accomplish” on climate change, Sahm said. “The Fed is there to implement what it is given as a mandate or responsibility from Congress. Without those mandates it has no business doing it. They’re not elected authorities.”