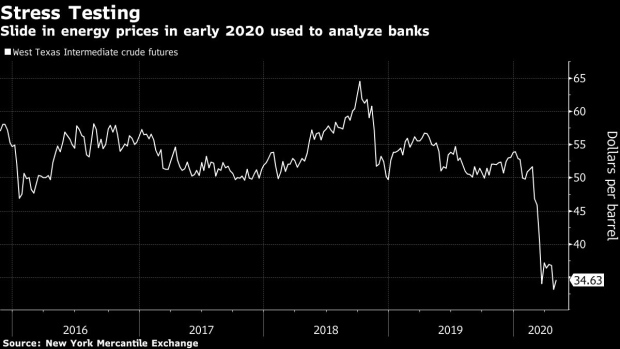 (Bloomberg) -- A new study published by the Federal Reserve Bank of New York offers a model for potential future stress tests on big banks for their exposure to risks from climate change, according to Morgan Stanley.

The paper, written by a New York Fed economist and two co-authors, amounts to an “important step” toward formal stress testing of the sector for climate risks, analysts at the New York-based bank wrote in a note to clients.

The study lays out a procedure for identifying assets within a bank’s portfolio that are vulnerable to climate-related shocks, and then calculates the expected capital shortfall resulting from a stress event. The authors used the energy-price collapse of 2020 in their study. They then applied their model to the 27 largest global banks, which account for 80% of loans to oil and gas firms worldwide.

The analysis estimated that capital shortfalls were, for some banks, “economically substantial.” For instance, the model estimated “the expected amount of capital that Citigroup Inc. would need to raise under the climate-stress scenario to restore a prudential capital ratio increased by $73 billion in 2020.” A Citigroup spokeswoman declined to comment.

While noting that the paper had no immediate policy implications, the Morgan Stanley team, including chief U.S. economist Ellen Zentner, called it “an important step as the Fed moves towards formally stress testing the financial sector for climate risks.”

Officials at the U.S. central bank have resisted the idea of integrating climate-related tests in their annual stress-tests of the largest banks, which are linked to bank capital requirements. However, Fed Chair Jerome Powell said in June he sees “climate scenario analysis” as an area of emerging study.

“The New York Fed is right to take the lead on creating concrete procedures,” said Alex Martin, senior policy analyst at Americans for Financial Reform, a liberal advocacy group. “Actual climate stress tests are already underway in many countries, and it’s past time for U.S. regulators to follow suit.”

The authors of the paper -- Hyeyoon Jung of the New York Fed, Richard Berner, former head of the Treasury’s Office of Financial Research and Robert Engle of New York University -- also found that while the impacts on different banks varied, they were highly correlated.

“This supports the idea that climate risk is systemic and not contained in one individual entity, which reinforces the Fed’s mandate to address this risk as a banking regulator,” the Morgan Stanley analysts wrote Monday. “We expect the Fed to implement bank climate stress testing between 2023-2025.”