The Federal Reserve swept into action on Sunday to save the U.S. economy from the fallout of the coronavirus, slashing its benchmark interest rate by a full percentage point to near zero and promising to boost its bond holdings by at least US$700 billion.

In remarks underlining the sense of urgency, Fed Chairman Jerome Powell told a hastily assembled press briefing by telephone that the disruption to lives and businesses meant second quarter U.S. growth would probably be weak and it was hard to know how long the effects would last. That left a clear role for fiscal policy to help cushion the blow.

“The thing that fiscal policy, and really only fiscal policy can do, is reach out directly to affected industries, affected workers, and we’ve seen some of that so that’s an important job,” he said. “We do know that the virus will run its course and that the U.S. economy will resume a normal level of activity. In the meantime, the Fed will continue to use our tools to support the flow of credit.”

The Fed pulled out some of the biggest weapons in its arsenal. It’s key rate is now zero to 0.25 per cent, matching the record low level it hit during the 2008 financial crisis and where it was held until December 2015. 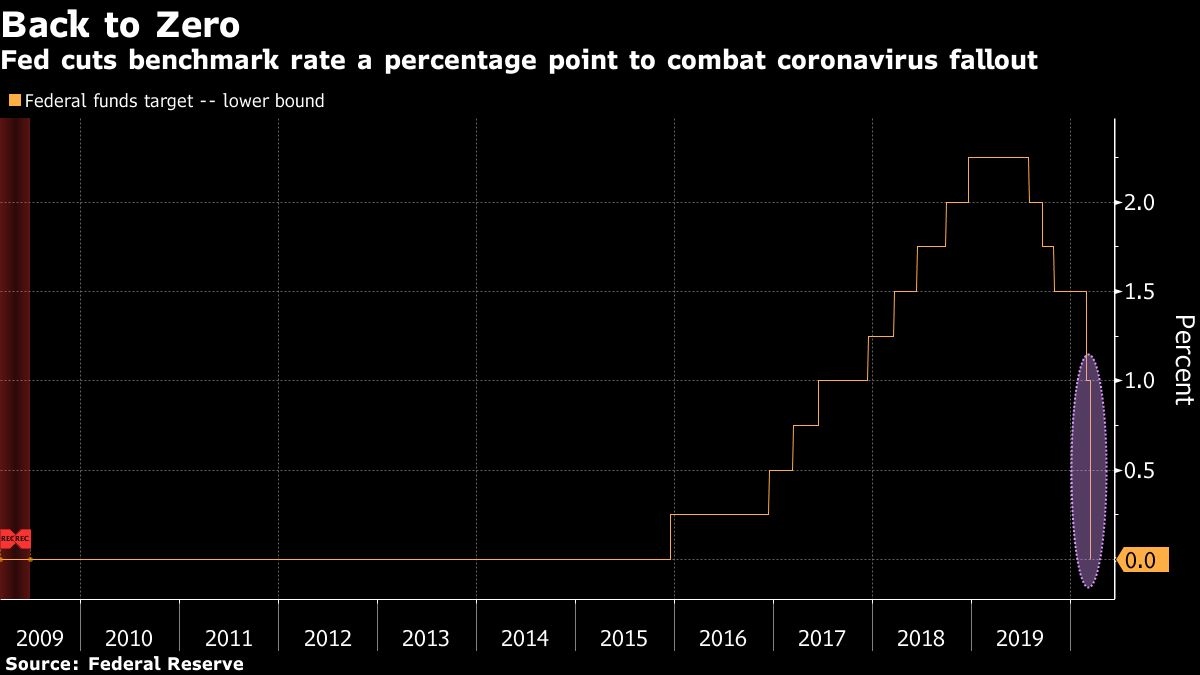 The central bank also announced several other actions, including letting banks borrow from the discount window for as long as 90 days and reducing reserve requirement ratios to zero percent. In addition, it united with five other central banks to ensure dollars are available around the world via swap lines. Powell said that he did not think negative rates, which have been used in Europe and Japan, would be appropriate policy in the U.S.

President Donald Trump, who as recently as Saturday attacked the Fed for not lowering rates faster and further, quickly expressed support for the move.

“It makes me very happy and I want to congratulate the Federal Reserve,” he said. “That’s a big step and I’m very happy they did it.”

Treasuries surged and U.S. equity futures tumbled at the start of another volatile week as investors responded to the rapidly escalating economic impact from the coronavirus and bet it will overwhelm the policy response. The Bank of Japan said it was bringing forward to Monday a meeting scheduled for later this week.

The Fed’s emergency action came as more and more evidence emerged that the U.S. economy is being hit hard by the virus. On Sunday alone, Ohio ordered all bars and restaurants closed indefinitely, Nike shuttered all its stores at least through March 27 and airlines announced drastic cuts to their international flight schedules. Businesses are instructing staff to work from home, and travel and entertainment are being particularly affected as people take steps to observe social distancing to avoid infection.

As the fallout spreads across the economy, the risk of a recession is mounting. Goldman Sachs slashed its GDP forecasts on Sunday. It’s now predicting zero growth in the first quarter and a five per cent contraction in the second.

Powell, who said he planned to do some telecommuting himself to set a good work-from-home example, told reporters on the call that the rate decision Sunday is in lieu of the Fed’s regularly scheduled meeting this week, planned for Tuesday and Wednesday.

He also said that the quarterly forecasts that would have been released at that meeting had been scrapped in light of the current uncertainty caused by the virus and would probably next be updated in June.

With Sunday’s announcement, the Fed is firing some of the biggest guns in its arsenal, but economists say without a similar, forceful response from the government, the country’s record 11 year expansion could end in recession. Stocks have already tumbled into a bear market.

“The Fed had to make this move, and waiting would have been a grave mistake,” said Michael Darda, market strategist at MKM Partners. “The problem is there is a tsunami coming and the Fed is likely to be overwhelmed by it, and the markets know that.”

The Fed said it will keep interest rates near zero “until it is confident that the economy has weathered recent events and is on track to achieve its maximum employment and price stability goals.”

The central bank acted the day before leaders from the Group of Seven nations, including Trump, are set to discuss their virus response on a teleconference. Central bankers and investors have pressed governments to do more to support their economies given monetary ammunition is running low and because fiscal policy can be targeted at corners of an economy that need it most. 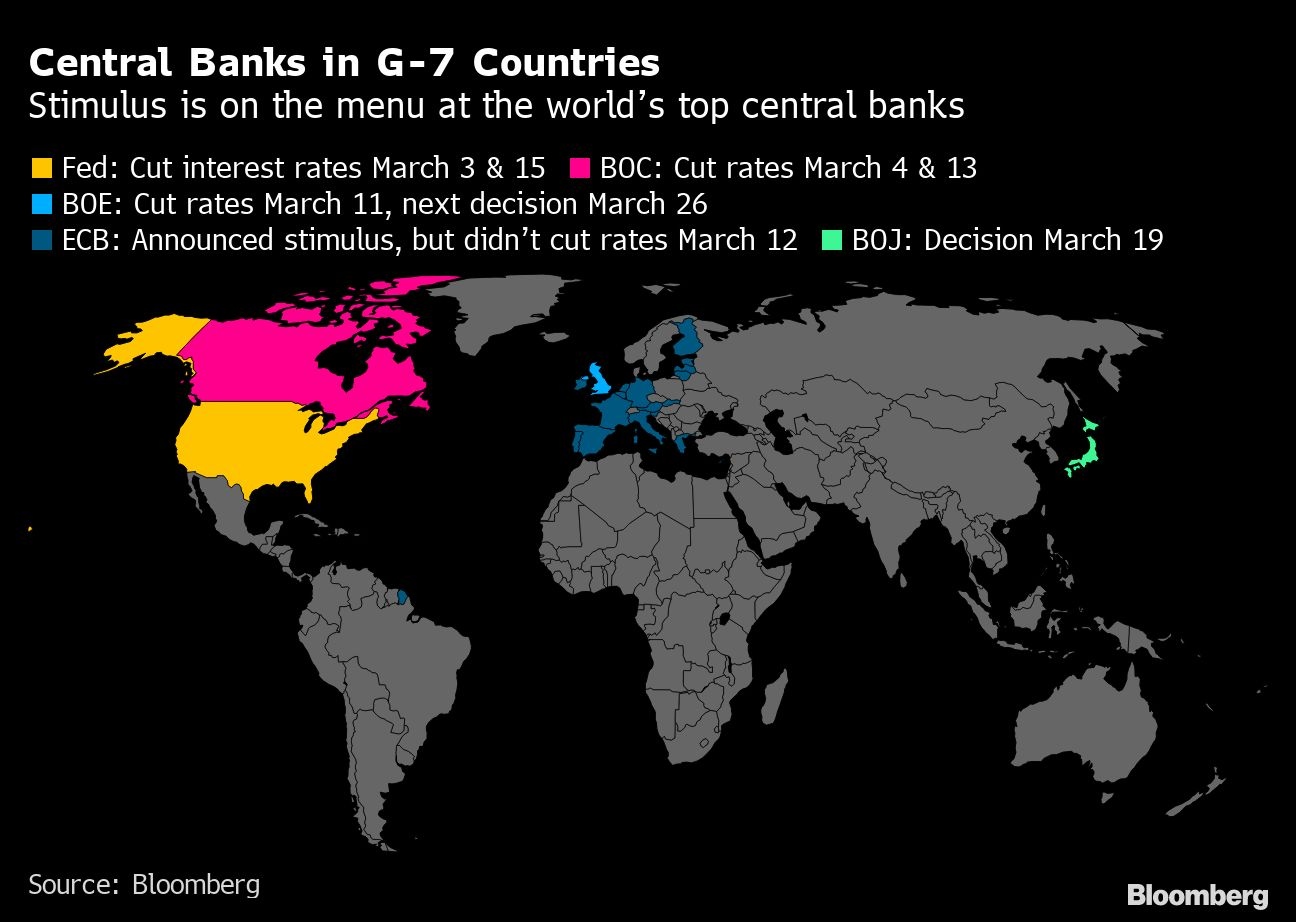 “The Federal Reserve is prepared to use its full range of tools to support the flow of credit to households and businesses and thereby promote its maximum employment and price stability goals,” it said.

Cleveland Fed President Loretta Mester cast a lone dissent, preferring rates were instead cut to a 0.5 per cent-0.75 per cent range.

“The fact that the Fed saw it as necessary to act with the meeting just three days away speaks to the urgency of the matter. The broad-spectrum of tools engaged shows the Fed is contending with more than just an economic shock.”

The Fed’s actions followed the Trump administration and Congress’s first comprehensive steps Friday to assure the public that it has a coordinated public health and fiscal policy response.

The dramatic Sunday evening move was not the Fed’s first big attempt to provide support. On Thursday it sought to ease strains in the Treasury debt market through massive injections of liquidity and broader purchases of U.S. securities -- a measure reminiscent of the quantitative easing it used during the financial crisis. 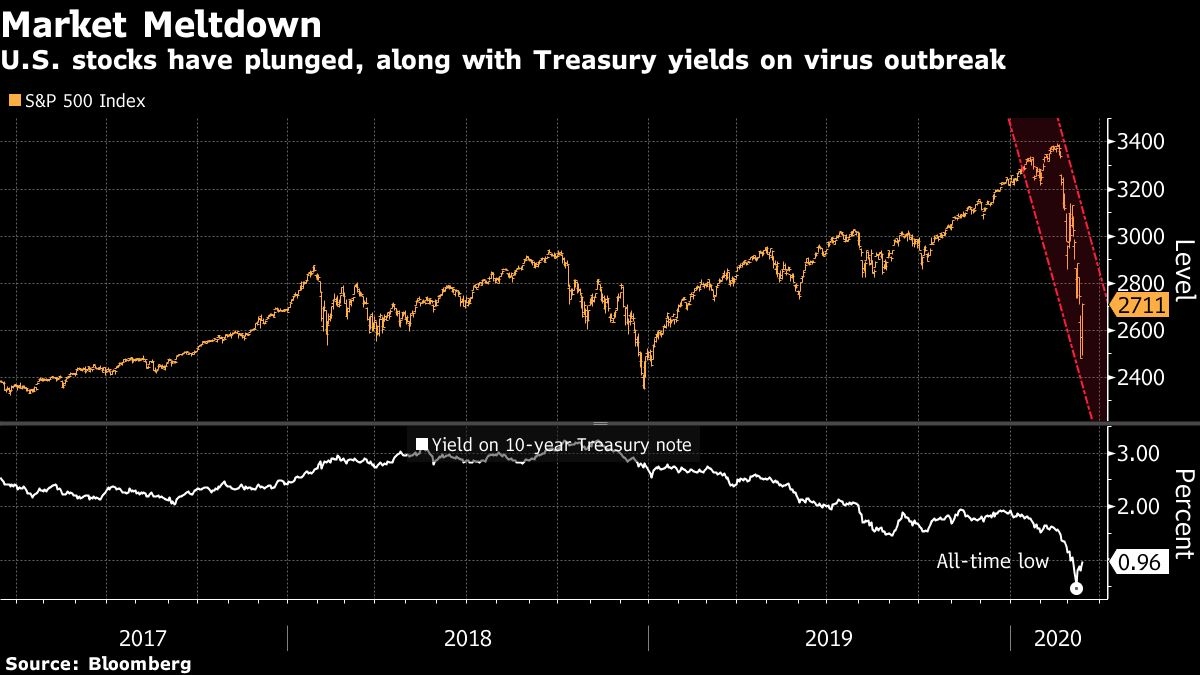 The Fed’s action also comes less than two weeks after it slashed rates by a half percentage point in an emergency move that failed to reassure nervous investors, in part because it was not accompanied by steps from other policy makers. That move -- alone -- failed to comfort investors and stocks ended the day down almost three per cent.

“The Fed’s mantra has been to go early and aggressive, so this is the best thing they could have done, they’re really inventing new stuff,” said Diane Swonk, chief economist at Grant Thornton in Chicago.

She also emphasized that more action is needed from fiscal authorities.

“This is not enough,” she said. “The Fed is showing its commitment a lot more than the federal government is. They’re going to have to step it up a lot more.”