The Federal Reserve slashed interest rates by half a percentage point in the first such emergency move since the 2008 financial crisis, amid mounting concern that the coronavirus outbreak threatens to stall the record U.S. economic expansion.

The rate cut, which came between the central bank’s regularly scheduled meetings, was announced hours after Group of Seven finance chiefs held a rare teleconference to pledge they’d do all they can to combat the fast-moving health crisis.

“My colleagues and I took this action to help the U.S. economy keep strong in the face of new risks to the economic outlook,” Fed Chairman Jerome Powell told a hastily convened press conference in Washington on Tuesday. “The spread of the coronavirus has brought new challenges and risks.”

Investors weren’t impressed by either the G-7 promise or the Fed’s move. After rallying earlier in the week on anticipation of action, the S&P 500 index fell more than 3 per cent while the 10-year Treasury yield plunged below 1 per cent. Traders are betting that the Fed will have to do more, with the futures markets pricing additional easing later this year. 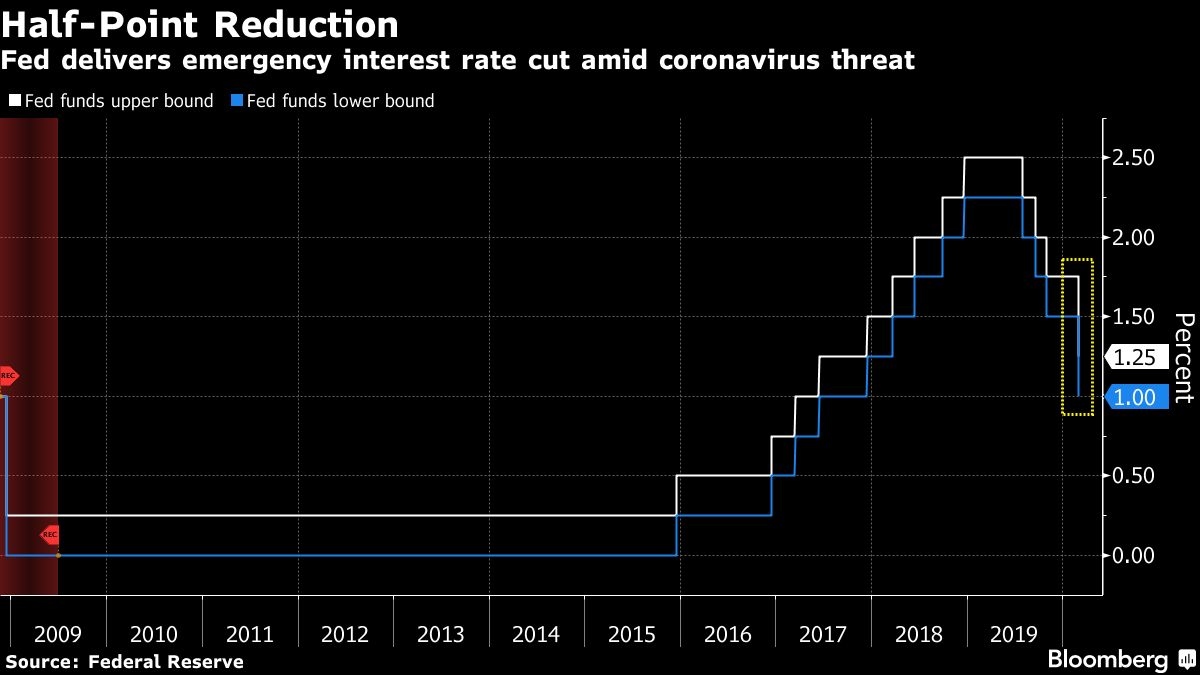 Powell left the door open to further action by the central bank at its next scheduled meeting March 17-18. “In the weeks and months ahead we will continue to closely monitor developments,” he said.

The Fed chief acknowledged that the Fed doesn’t have all the answers, adding that it would take a multi-faceted response from governments, health care professionals, central bankers and others to stem the human and economic damage.

“We do recognize a rate cut will not reduce the rate of infection, it won’t fix a broken supply chain. We get that,” Powell said. “But we do believe that our action will provide a meaningful boost to the economy.”

The vote for the rate cut to a range of 1 per cent to 1.25 per cent was unanimous even though the Fed said in a statement that the “fundamentals of the U.S. economy remain strong.” Powell has staked his chairmanship on sustaining the U.S. economic expansion, now in its record 11th year.

“The Fed has very little ammunition and the ammunition that it does have is not at all suited to the task of managing a potentially large adverse supply shock,” said Jonathan Wright, economics professor at Johns Hopkins University and a former Fed economist. “They have taken the view that they should do what they can with the tools that they have.”

The Fed’s decision could presage a wave of easing from other central banks around the world although those in the euro-area and Japan have less scope to follow with rates already in negative territory.

The Fed move also followed public pressure for a cut by President Donald Trump, whose stewardship of the economy is central to his reelection campaign this year.

After today’s shift he called for more, demanding in a tweet that the Fed “must further ease and, most importantly, come into line with other countries/competitors. We are not playing on a level field. Not fair to USA.”

The Federal Reserve is cutting but must further ease and, most importantly, come into line with other countries/competitors. We are not playing on a level field. Not fair to USA. It is finally time for the Federal Reserve to LEAD. More easing and cutting!

Tuesday was the first time the Fed had cut by more than 25 basis points since 2008 and the reduction marks a stark shift for Powell and his colleagues. They had previously projected no change in rates during 2020, remaining on the sidelines during the election year, after lowering their benchmark three times in 2019.

“We now anticipate an additional 50 bps of easing by midyear, in two consecutive 25 basis point cuts. Headlines related to the coronavirus will determine whether these begin in March or April.”

In a public health emergency, lower rates do little for factories lacking needed materials from abroad and are unlikely to spur consumers to shop if they’re scared of infection. But they should support consumer and business sentiment as well as ease financial conditions by making debt payments easier to manage and by calming market volatility.

Lawmakers are also working on a US$7.5 billion virus response bill, another reminder that critical fiscal policy can take weeks to move through Congress.

One lesson Fed officials will take away from this moment is how rapidly their policy space is used up in a crisis.

Total cuts of one percentage point this year, which several Wall Street firms are forecasting, would bring the bottom range of the Fed policy rate down to 0.5 per cent. If the virus impact is worse than expected, or if the economy is hit by a separate shock, the policy rate could strike zero.

At that point, Fed officials are left with unconventional tools, such as purchases of longer-dated Treasuries -- known as quantitative easing. The effectiveness of such tools when longer-term rates are already low remains to be seen.

The Fed is in the midst of a review of its tool kit to achieve its goal of maximum employment and stable prices. They are considering policies such as outcome-based forward guidance, where a policy change would be linked to some tangible metric such as achieving an inflation rate, and yield curve caps.

Wherever the discussion lands, the virus has highlighted the need for better fiscal and monetary policy coordination in a time of exceptionally low interest rates, says Julia Coronado, the president of MacroPolicy Perspectives.

The Fed is “carrying the domestic burden and the global burden,” Coronado said. “The fiscal policy response has been lacking. There are people that are going to be struggling to pay their bills and certain workers are going to lose incomes. This is the shock that needs to be insured and we are really behind the curve.”